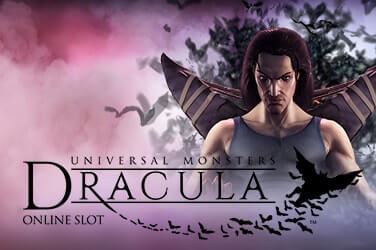 NetEnt takes you on a journey into the underworld. The player is introduced to the Vampire King Dracula himself.

The game instills feelings of awe and horror as it succeeds in portraying the 1931 Hollywood film Count Dracula. Dracula has an immersive design and a wide variety of features and bonuses. The player has the potential of winning relatively stable payouts.

Played across 5 reels and 40 paylines, Dracula has some interesting cluster wilds and free spins. If you are into lore behind vampires, then this online slot is sure to seduce you.

NetEnt has collaborated with Universal Studios in the design of Dracula, and it shows. The graphics, animations, color palette and symbol design are simply brilliant. In addition, the developers succeed in paying homage to the movie Count Dracula. This can be seen in the backdrop of the slot game that reals the Vampire King sitting menacingly on his throne.

The video slot game unsurprisingly employs a black and grey color palette. Moreover, its symbols are rather limited and include the likes of Dracula and a lady who is presumably his countess. Furthermore, the animations of the bat feature instil a sense of horror and immediately immerses the player into the game.

The betting range of Dracula is between 0.20 and 200 credits. This is fairly broad and is thus, accommodative of budget players and high-rollers alike. The game has a simple and easy to navigate user interface and functions without fault across all devices.

The objective of the online slot is to obtain similar symbols adjacent to each other in order to yield payouts. Note that some symbols yield higher payouts than others. The maximum payout in the game is 400x the original stake. This can be won by combining standard gameplay with the video slots features and bonuses.

The Wild in the online slot is represented by a giant W and has the ability to replace any symbol on reels in order to make a better winning combination. This can be used in conjunction with several features in the game.
For instance, the Bat Feature is triggered randomly. Bats eerily fly onto the reels in a cluster formation and have the ability to transform into any random symbol including wilds! This can lead to some hefty payouts.

The return to player (RTP) of Dracula is 96.6%. This means that theoretically, a player wins an average of €96.6 for every €100 bet made, Note that this average is a cumulative of over 4000 attempts. The variance in the online slot game is low indicating that the player can expect stable payouts.

A combination of an outstanding design, stable payouts and a healthy RTP give This Las Vegas Casino a top-end replay value.