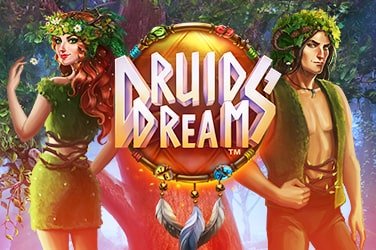 Druid’s Dream is an interesting video slot from NetEnt, which has a Celtic theme. This is quite unique, and adds to the overall experience of playing this game, with the superb visuals being a definite highlight.

An enchanted forest forms the background for the game, with various magical symbols showing up on the reels as well. The reels themselves are set in a large stone tablet, while soothing Celtic music plays during the online slot game, helping to create a calm and peaceful ambience.

Druids were mystics in Celtic folklore who could use nature’s powers, and we see them show up on the reels as the Druid’s Dream online slot game’s scatter symbols. Other icons include a clay whistle and druidic drum, which are magical tools used by druids, while a beautiful white wolf is Druid’s Dream video slot game’s Wild symbol. The basic symbols are represented by various coloured stones.

Druid’s Dream slot game has three rows, five reels and 40 paylines. Wins are awarded by landing at least three of any symbol on the reels, with the Wild being the most valuable, paying out upto 5x of the stake.

There is an autoplay option as well in Druid’s Dream video slot, with players able to specify conditions such as a certain number of wins or losses, or specific win/loss values, for the spins to stop. This is a good addition for those looking for a more seamless experience.

Stacked wilds can land on reels 2 and 4, and if they do so along with a scatter, this activates the Wild Charge feature. Every wild will get ‘charged’ and award a respin, while also turning sticky. This may also trigger bonus rounds.

Players can bet from 0.20 credits up to 400 credits, spread across the paylines equally. This is a low to medium volatility game with an RTP of 96%

The theme in Druid’s Dream is definitely a unique one, with the music and visuals creating a very peaceful ambience that is actually helpful while playing the online slot. The base game gives you enough chances to pick up smaller wins, while the big ones will come in the free spins round. This game is well-suited for those looking for a new theme to try out without too much risk.
This is just one of the many amazing slots Las Vegas Casino has to offer.