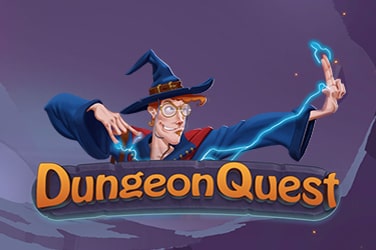 Dungeon Quest is a fantasy-themed slot game from Nolimit City that will have you searching for the lost treasures of Khordor. Of course, this means that you could be in with a chance of nabbing some riches for yourself too.

The graphics and visuals for this game are quite crisp and clear, with the game being set on Mount Behadh. There is a cave where the game takes place, with hidden dungeons shaped like a monster’s face with a wide open mouth, and this forms the backdrop for the reels.

There are four heroes here as well, who have accompanied you on this quest and will defend you, and they show up on the left of the grid. Being a magical themed slot game, it is no surprise to see symbols like magical gems and jewels showing up on the reels. The various coloured gems are the highest paying symbols, while their ores are slightly lower in value. The Wild is in the shape of a stone, while a purple orb forms the scatter.

This is a game with 5×7 adjacent reels on a grid, and 29 paylines. The Wild will substitute as usual for any other symbol on the reels. Since this is an adjacent reel game, it does not matter where the symbols fall for them to create winning combinations, as long as they are adjacent to each other. The base game is simple enough, with a minimum of three symbols needed to trigger a win. The gems all pay out from 5x up to 100x depending on the number that land adjacent to each other, while the ores pay out 4x to 30x, and the Wild only pays out if you land five of it on a payline.

There are two features in the base game that can get triggered randomly. The first is the Power Stone, where a random 2×2 area of the grid will be replaced with Wild symbols. One of the ores on the grid will also be randomly turned into a Wild, thereby increasing the chances of a win.

The second feature is the Gem Forge. Here, one of the ore symbols is randomly chosen and replaces all of the others on the grid. Once the spin is complete, that ore will get upgraded to its gem counterpart – so the blue ore will become blue gems, and so on. Again, this increases your chances of a win, while also upgrading your payout for a Legendary Loot.

Landing three or more of the scatters in the base game will give you four Alchemy Spins. Each of these spins is based around one of the ores, in a predetermined order, where the ore turns into a locked Wild for the duration of the Alchemy Spins round.

This is a great game, with excellent payouts, a great theme, superb visuals, and some cool bonuses that can really break the bank for you, especially with the Alchemy Spins. So why not give it a shot at Las Vegas Casino?