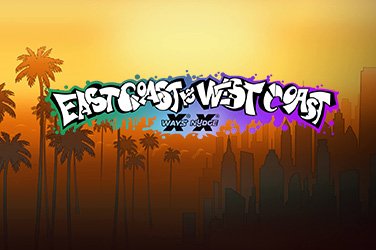 NoLimit City have provided players with their East Coast vs West Coast online slot game with the opportunity to win up to 84,375 ways, whilst also giving Las Vegas Casino players the chance to take advantage of free spins, nudges and win multipliers as well.

NoLimit City have gone with the hip-hop theme in this East Coast vs West Coast video slot, which provides something rather fresh and different compared to many of the other themes that have been adopted by developers already.

Developers have certainly used some poetic licence within this slot game, as they have provided George Washington and Benjamin Franklin as individuals who are wearing gold chains and gangster hats to help try and build the theme as well.

Furthermore, the slot game’s background appears to have been split in two. Although behind the playing board, the street looks to have been merged together as the West Coast and East Coast are represented on each side.

Taking a look at the paytable, there are a variety of different symbol available, including graffiti-style traditional playing card royals, as well as some cartoonistic designs, such as the aforementioned presidents, a bulldog and an individual with a sound system machine on his shoulders.

As you look to play this East Coast vs West Coast online slot, you will find that there is a playing grid that has 5 reels and 3 rows, as well as the potential of winning up to 84,375 different ways. Initially, the video slot does start with 243 winning ways, but players will simply need to land on three or more matching symbols on adjacent reels from left to right.

There are a number of special bonus features in this online slot, as NoLimit City have added in five different respin features.

The ‘Drive-by Respins’ feature will appear when two scatters land on the reels and players are able to choose one of the enhancers that can help them land more wins. These include the infectious xWays, the linked reels, the multipliers, the xNudge wilds, and the xWays systems.

For those players that land 3 or 4 scatters, they will trigger the ‘free spins’ round and will be provided with either 8 or 10 Free Spins, depending on how many appear. Here they will be able to choose from either the East Coast or West Coast with each game providing something slightly different.

In the East Coast, players will find that the round is highly volatile and the infectious xWays symbol will land on every spin.

Those that choose the West Coast free spins bonus will find that they win more regularly, and each spin will land either the xWays, the xNudge wild, the multiplier or the linked reels enhancer.

Those players who are fortunate enough to land 5 bonus symbols will trigger the ‘Coast to Coast’ free game. Those that activate it will get 12 Free Spins during which 2 different enhances will simultaneously land on the reels.

NoLimit City’s East Coast vs West Coast slot game features a return to player (RTP) rate of 96.04% and has a rather high volatility level.

East Coast vs West Coast video slot provides players with a rather brilliant gameplay experience and one that is rather different compared to many of the traditional online slots that have been seen before.

Of course, the ability to win from up to 84,375 different paylines is something that will appeal to many, whilst the bonuses available can make those wins incredibly lucrative.