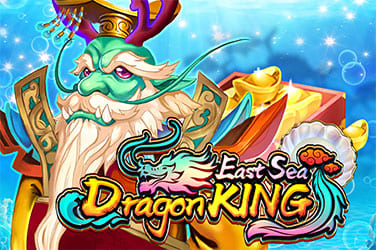 A top prize of 10,000x the bet can be won in this East Sea Dragon King videoslot, as can expanding wilds and respin features!

What do you get when you cross an underwater theme with an Asian theme? NetEnt’s East Sea Dragon King online slot game! The developers are used to providing Las Vegas Casino players with some truly unique slot game experiences and this is certainly one of them.

However, as good as they are at providing some rather unique titles, it should be noted that they are also amongst the best developers when it comes down to the graphics and visuals that they provide.

Players will feel as though they are underwater in this game as they will see a crystal blue ocean cover the screen with animated bubbles going across, whilst they will also see a number of Chinese themed icons appearing on the playing grid.

These icons consist of objects such as Medallions, Pearls, Golden Scrolls, Chest of Ingots and a Jade Dragon, with 15 of these providing players with the biggest reward that the game has to offer; 10,000x the bet!

When thinking that 15 of these icons can appear on the grid, questions about the playing grid will naturally be asked.

Las Vegas Casino players will find that there is a traditional grid consisting of 5 reels and 3 rows available to play on, however, the game features a ‘Cluster-Pays’ mechanism, meaning icons that are in groups can be formed and used as winning combinations!

Further gameplay experiences can be customised and altered via the game panel at the bottom of the grid, with NetEnt having provided an easy-to-use panel.

Whilst the Cluster Pays mechanic is a nice addition to this East Sea Dragon King online slot game, there are still some nice additional bonus features that players can look to make the most of, including respins.

Players who manage to land the dragon king will see this icon expand and cover the entire reel to try and form a substitution for all of the three icons that were initially on the reel prior to its expansion. Furthermore, the wins will be awarded once all wilds have been expanded and then the respin will take place.

Any new wilds that appear will be expanded and another respin will be activated until no further expanding wilds appear on the playing reels. Players who are able to fill all five reels with wilds will receive a payout of 10,000 coins!

This NetEnt East Sea Dragon King online slot game has a return to player (RTP) rate of 96.23% and a volatility level that is considered to be of a high level, thus meaning big wins can be recorded, although rather infrequently.

Las Vegas Casino players will love this underwater-themed game that has been combined with an Asian theme as they will find that it can be rather rewarding if they dive to the depths of the ocean successfully.

NetEnt has provided this game with a great pay method, as well as an RTP rate of 96.23%, which means the special bonus features available can be rather rewarding!