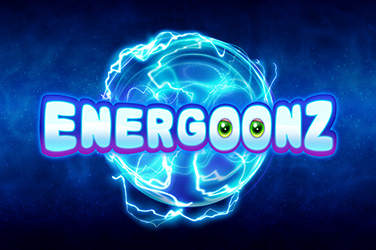 Las Vegas Casino players who enter the world in this Energoonz Videoslot will be rewarded with a free spins game that can provide some eclectic rewards!

Players will be transported to the wacky world that the Energoonz lives in when they load up this slot game, with the team at Play’n GO being as inventive and creative as they can when designing this video slot.

The Energoonz online slot game features a backdrop that consists of a blue colouring that works well, whilst each of the symbols have been provided with a number of different designs and animations that bring them to life.

Speaking of the icons, there are a number of different Energoonz available on the game’s paytable, each with its own animations. There are also a number of other icons available, including things such as lightning bolts and flames.

This Energoonz online video slot game consists of a playing grid that follows a 5×5 format, thus meaning there are essentially 5 reels and 5 rows in which Las Vegas Casino players can try and form winning combinations.

Those that manage to obtain a winning sequence of three or more identical icons will see them disappear. When the entire grid disappears on a single spin, an additional reward will be provided!

When speaking about clearing the grid, those that are able to clear a column that has the word ‘Bonus’ hidden behind it will trigger the Energoonz bonus feature that is available in this Play n’ GO slot game.

The column is random on each spin that is made, whilst it has the potential of being behind two or three columns on any given spin, thus providing players with even more chances to trigger the game. Players who clear a column with it will be taken to a new playing grid that is filled with a number of new Energoonz characters.

These icons are all shown to be asleep, however, when multiple of them appear on the grid, they will be brought to life via electrocution. They will then gain colour and will reward players with a certain prize.

Furthermore, this Energoonz bonus will provide players with 10 free spins that they can play with, although those Las Vegas Casino players who are able to land five or more of the electricity machine icons will be able to trigger a second feature with a maximum of 20 rounds that can be played.

The plasma ball is another great icon that players should continue to look out for as this is the Energoonz slot game wild symbol and can help to form additional winning combinations via a method of substitution.

A minimum bet of €/£/$0.20 per spin can be placed on the reels of this Energoonz online video slot game, although Playn’ GO have allowed a maximum bet of €/£/$100 per spin to be wagered for those with bigger budgets.

The return to player (RTP) rate for this Energoonz online slot is 96.69% and features a volatility rate that is considered to be of a medium level.

With the bonus free spins game available to play, this Energoonz online slot game from Play’ n GO provides Las Vegas Casino players with a game that is incredible to play and full of entertainment value!