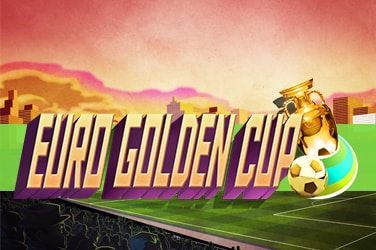 Euro Golden Cup is a slot game by Genesis gaming launched on 4 April 2016. Released in time for Euro 2016, this football-themed online slot game is all about the features. Play Euro Golden Cup and other slot games at the Las Vegas casino.

Euro Golden Cup is a football-themed slot by Genesis Gaming. It’s a 5-reel, 25-pay line slot game in which you move through the tiers to achieve ultimate glory, much like a major tournament. Free spins with stacked wilds, changing symbols wilds, and a penalty shootout mode with multiplier payouts are among the bonuses available to the trophy—playable on all platforms, with stakes ranging from 25p to £250 each spin.

The Euro Golden Cup is attractive because of the large prize pool. It is of the Video Slots genre, with a payout pattern of line-reels 5-3 and Cup Ball as symbols. Cup, Ball, and other symbols are likely to captivate you in this online casino game. Wild, RTP range, Multiplier, Free Spins, Scatter symbols, Additional Game, and Level Up are among the many bonus features available in this online slot.

The player is guaranteed a win equal to the face value of the symbols if the identical symbols appear in a line on all three reels. The maximum number of winning lines in this slot game is 25. And when the costliest symbols appear on each reel, the player has the option of counting on the maximum win.

The lower value symbol in this slot game is football jerseys with the numbers 14 through 9 on them, rather than playing cards. A quartet of players joins them, the greatest of which will pay you 40 times your entire wager if you can hit 5 on a pay line.

In this online slot, the golden football is the wild symbol, appearing on reels 2, 3, 4, and 5, replacing all other symbols except the scatter. Keep an eye out for national flags; if you get matching flags on reels 1 and 5, you’ll receive a trophy that will help you open additional features.

The referee’s whistle is the scatter, and three or more of them will activate the Play Maker Free Spins bonus. You’ll get ten free spins with piled sliding wilds in this online slot. The stacked wild will move to fill the rest of the reel if any portion of it shows. If the scatters appear again, you’ll be awarded another ten free spins.

In this online casino game, trophies may be earned by landing national flags on reels one and five or by activating the feature by landing three or more scatter symbols anywhere in view; every 15 trophies earned unlocks a new bonus, as detailed below.

· PlayMaker Free Spins (0-14 trophies) – 10/12/15 free spins are awarded a stacked wild that will fill the full reels if it falls anywhere in view
· Striker Feature (15-29 trophies) – 10 free spins with a striker target that transforms into a different symbol (level 2) or a wild symbol (level 3) (level 3)
· Penalty Shootout (30+ trophies) – Take five penalty shots at the other goaltender; a goal is worth 2x-5x the total stake, while a miss is 1x. Your total victory is doubled if you score more points than your opponent

The theoretical return to player (RTP) of the Euro Golden Cup slot game is 94.35 %. That’s poor for a slot game.