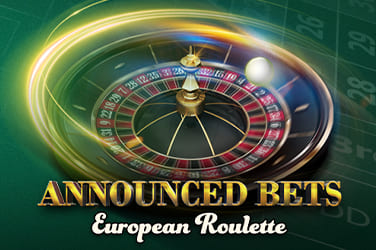 Tom Horn Gaming’s European Roulette Announced Bets game is designed in a beautiful way, with some of the best graphics and stunning visuals having been used to bring this online Table game to life in an ultimate way.

Once the Table game loads up, players will be provided with a realistic-looking table that features the roulette wheel spinning to the left, whilst the racetrack is to the right of the screen. There are a number of different options that are available to bet on within this online Table game with a number of announced bets all available to choose from towards the top.

Las Vegas Casino players will find this European Roulette Announced Bets online table game rather easy to play as all they will need to do is click on the bet or the section of the racetrack that they wish to place a bet on and it will be instantly placed.

Once the desired bets have been placed – after having selected how much to wager – players can release the ball and see it go around the wheel before it lands on a segment that is available.

The main bonus feature available in this European Roulette Announced Bets game by Tom Horn Gaming is the inclusion of the announced bets that have been provided to players at Las Vegas Casino.

Those announced bets are the famous call bets that include Les Voisins du Zero, Tiers du Cylindre and Les Orphelins, with each of these bets easy to use and coming with quick pre-set templates thus allowing players to make their bets as quickly as possible and in a timely manner across a plethora of different numbers.

There may not be many other European Roulette Announced Bets bonus features available in this Tom Horn Gaming title, although with a number of rich features and incredible 3D graphics that each add to the overall experience and provide Las Vegas Casino players with a near-real experience.

Players are able to select from an array of different chips when playing this European Roulette Announced Bets game, with bets of up to €/£/$500 allowed on each selection.

Furthermore, Tom Horn Gaming have revealed that this online game has been provided with a return to player (RTP) rate of 97.29%, which means bettors can feel comfortable that they will receive a satisfactory return when spinning the roulette wheel over a period of time.

With a number of great feature bets available to make the most of to further enhance the playing experience, this European Roulette Announced Bets game by Tom Horn Gaming will provide Las Vegas Casino players with a top experience and one that can be rather rewarding when they right choices are made!

Try this Table game at Las Vegas Casino now! Have some fun and may luck be with you.