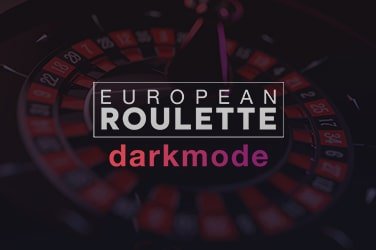 European Roulette Darkmode table game is just one of the latest variants of online roulette games that players can now look to try and win from at Las Vegas Casino.

This online roulette game has been provided by Microgaming and in collaboration with Gluck Games and provides an interesting take on a hugely popular and classic casino game known all over the world.

Players who look to play this variant of online table game will find that the main theme is of a dark colour theme. The dark – which can also be known as ‘night’ – colour schemes have recently been adopted by companies all around the world who have an application, website, or game, as they have proven a popular alternative than the traditional ‘day’ or ‘brighter’ colours used. Furthermore, the racetrack of this European Roulette Darkmode table game is black, whilst the roulette wheel is also dark, despite the traditional colours being used. In addition, there are some cool animations used when the wheel spins.

The gameplay of this European Roulette Darkmode online table game follows a rather traditional structure. With 37 numbers on the wheel – between 0 and 36 – players will need to have to try and predict where the ball lands when placing their bets before the roulette wheel turns. Players will need to select the number they think it could land on by clicking on it.

Thre are two different types of bets that can be placed in this online table game: Inside and Outside These can look like the following:

Inside bets are placed on a specific number on the table layout:

Outside bets are placed on the areas of the table that represent a group of numbers:

Although one of the main features that this European Roulette Darkmode table game has is the ‘dark’ themes that have been used, Microgaming and Gluck Games have provided bettors with a few additional bonuses that can further enhance the gameplay experiences felt when trying to predict where the ball will land.

Firstly, the ‘Autoplay’ feature has been introduced and this will see the table game played for a predetermined number of rounds. This is particularly handy for those players who want to place the same bets for a while.

Furthermore, there is an ‘Interrupted Play’ feature that is great for those that are unable to play the game without fear that the internet connection might go or that things change and they do not have enough time to continue with their game. This feature will automatically save where players get up to before external circumstances force an issue.

The return to player (RTP) rate of this European Roulette Darkmode online roulette casino game stands at 97.3%, thus meaning the house edge is just 2.7%. Players are able to make a bet from a number of different chips available, consisting of €/£/$1, 5, 10, 25 and 50. Those who manage to achieve a straight win will receive an award worth a nice 35:1.

European Roulette Darkmode will provide Las Vegas Casino players with an alternative when looking for a new online table game to play and it would not be a surprise if it became the number one option for many. The ‘dark’ themes have become highly popular in many forms of daily life, so many might look to use the theme with their gaming experience as well. Furthermore, the bonus features are a nice touch and something that makes this table game rather enjoyable.
Check this and other great online casino games at Las Vegas Casino