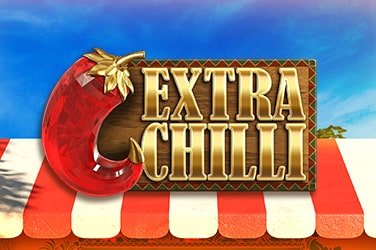 Extra Chilli is a Megaways slot from Big Time Gaming set in a market stall selling chilli peppers, garlic, and other culinary condiments. It’s a cute slot game with a beautifully illustrated background, where other market stalls and even a church bell are visible. Aside from this, let’s see if the slot’s gameplay packs the same fiery kick as its design.

Extra Chilli is a Megaways slot game which features 117,649 ways to win. Like in other ways to win slots, players win by lining up matching symbols on adjacent reels from left to right. The highest paying symbols in the game are the four chilli peppers: the purple pepper pays between 2x and 50x the stake for two to five symbols on adjacent reels, while the red pepper pays between 1x and 7.5x the bet for two to five symbols. Blue and green chilli peppers pay out up to 2x the bet for five symbols. It’s clear from this paytable that players who want to land the biggest wins really need to keep an eye out for the purple peppers.

Where to start? There are a ton of special features to look out for in the Extra Chilli slot game. First of all, the slot features cascading reels, which means when winning combinations land those symbols disappear and new ones fall into place immediately, opening up the chance for further wins on a single spin.

There are also Scatter symbols on the reels of Extra Chilli slot game which spell ‘HOT’, land three of these to unlock eight Free Spins, with further Scatters unlocking four more free spins each. During Free Spins, an unlimited win multiplier is in play which multiplies consecutive wins every time symbols react and cascade into place.

On top of all this, there are Free Spins Scatter symbols on Extra Chilli slot game which offer bonus free spins on the extra reel, a Free Spins Gamble wheel which allows players to gamble their free spins for more, and a Feature Drop mechanic which can trigger the game’s main feature.

Extra Chilli offers an RTP of 96.82%, which is pretty good and above average compared to many slots. This figure means that for every $/€/£100 you spend on the reels of Extra Chilli slot game, you should win around $/€/£96.82 back, although obviously many players win more or less than this. However, it’s a high variance slot game which makes it better for those players who prefer to wait for bigger wins, and not recommended for casual players who like to drop in and out of slots.

Extra Chilli is a good looking slot game which offers many of the features commonly seen in Megaways slots, including cascading reels, Free Spins, and multipliers. If you enjoy other Megaways slot games by Big Time Gaming like Who Wants to be a Millionaire, then no doubt Extra Chilli also packs a punch for you. It’s also got a good RTP, and unless you look hard you’ll be hard pushed to find a better RTP than this in most online slots, which means if you’re counting the pennies, Extra Chilli isn’t a bad choice.

Play the most sought after online slot games like the Extra Chilli slot game by Big Time Gaming and give your evaluation here at Las Vegas Casino so we can provide you with the ultimate online casino experience.