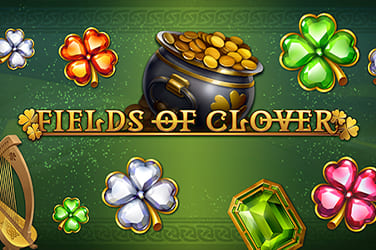 Expanding wilds and win multipliers will have Las Vegas Casino players feeling as though they have the luck of the Irish in this Fields of Clover slot game available to play here!

Hardly a surprise given the slot game’s name, but 1×2 Gaming has gone for an Irish theme with their Fields of Clover online slot game title. Indeed, players who load this game up to spin the reels will be inundated with a number of Irish themes and visuals, with the colour green being prominent.

The playing grid also features green and gold colouring, whilst the symbols also come provided richly designed with some cool visuals and graphics, as well as the top colours.

There are a number of icons available on the paytable, with five different four-leaf clovers all available on the grid as the low-value icons. These are then followed by a harp and an emerald, which is the most rewarding icon in this Fields of Clover online slot game when five land on an active payline.

This Fields of Clover online slot game is incredibly easy to learn and simple to play and follow as 1×2 Gaming has provided players with a playing grid that consists of 5 reels and 3 rows. There are a total of 10 paylines available, although players could think of these as 20 as the game features a pays both ways mechanism which means winning combinations can be formed from either side of the grid!

Las Vegas Casino players looking ahead to the Field of Clover bonus features available will be pleased that there is one that can help to further build the wins that are potentially available in this online slot game.

The bonus feature comes courtesy of the game’s wild icon, which is a pot of gold. This icon can only appear on the middle three reels and is able to substitute all other icons available on the grid to help form winning combinations where possible.

Furthermore, players who land a pot of gold will also be able to activate the respin feature that has been provided. The icon will expand and turn the whole reel it has landed on into a wild reel, before seeing each of the other reels be respun to try and form even more wins.

Las Vegas Casino players who are fortunate enough to land a second wild on the respin will see the icon be expanded once again, but players will benefit from a 2x multiplier this time as well, thus receiving a payout that has been doubled in size!

Achieve this a third time and another respin will be delivered with each of the three middle reels fully wild, whilst a 3x multiplier will be awarded for any prizes that occur! Remember, with a pays both ways mechanic in play, bettors could potentially win rather big prizes in this game!

The return to player (RTP) rate for this Fields of Clover online slot game is 96.04%, which can be considered slightly above average, whilst the win frequency rate is set at around 21%. This means for every five spins made, one win can be expected theoretically.

With so many different ways to win and obtain a reward of substantial value, this Fields of Clover online slot game has all the potential to have players jumping for joy once they spin the reels. With a pays both ways mechanic being used, players will hope they have the luck of the Irish with them!