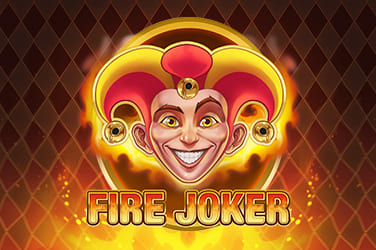 With up to 800x the bet available to win via the ‘Wheel of Multipliers’ feature, this Fire Joker videoslot will have Las Vegas Casino players spinning the reels as soon as they can!

Fire Joker online video slot game is a game that provides players with a rather simplistic gameplay experience, but one that Las Vegas Casino players will welcome and can certainly enjoy to its fullest.

The game adopts a theme of red throughout, although that should not be a shock considering that the title includes the word ‘fire’. The background of the game also has some animated actions to it, with burning embers being able to be seen floating upwards through the screen.

The playing grid has been designed with a red backing, whilst the icons that appear can all be considered to be rather classical but with an updated design as many of them can be found on a traditional fruit machine slot game.

There are blue X’s, cherries, lemons, grapes, plums, BARs, stars and red lucky 7s all available to collect, whilst the Joker icon in this game is the wild.

This Fire Joker online video slot game features a truly simplistic gameplay experience as bettors are able to play on a grid that consists of just 3 reels and 3 rows in which the aforementioned icons appear, with a total of just 5 paylines available.

The gameplay experience can be altered and customised in various ways via the settings button to the right of the playing grid.

Despite being an incredibly easy game to play, Play’n GO has still managed to make this Fire Joker online video slot game as fun and enjoyable to play via the use of some great bonuses.

As mentioned earlier, the game’s wild is the Joker icon and this icon can help to complete any winning sequence when it appears on the reels. It can appear in any position, thus boosting the potential wins.

Players who are able to line up stacked icons on two reels will be able to activate the ‘Re-spin of Fire’ feature that is available. This will mean that the two stacked reels will remain in position and locked as the third will be respun to try and form a win.

The final Fire Joker bonus feature that the developer has included, though, could be the best one as players who manage to match the symbols across the three reels will be able to activate the ‘Wheel of Multipliers’ feature.

In this game, players will spin the wheel and look to earn a huge random multiplier of up to 10x the prize. Therefore, those who land 3 Joker icons and a 10x multiplier will be able to earn up to 800x the bet as a payout!

The return to player (RTP) rate for this Fire Joker online video slot game is 96% and features a medium volatility level.

Those that want to play this game will find that the minimum bet is €/£/$0.05 per spin, whilst those who want to place the maximum bet on each spin can wager €/£/$100.

As mentioned, the potential to win up to 800x the bet will be the biggest draw to this simple game, although Las Vegas Casino players will still be able to win some nice rewards as they continue to spin the reels.

The game might be simple to play, but that does not mean Fire Joker online slot game is one to miss!