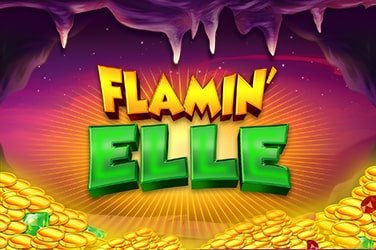 Flamin’ Elle, by Core Gaming, is a fun video slot, with players entering the lair of the dragon to try and escape with his treasure.

Unlike most slots which have a dragon theme, the graphics for this one are quite cartoonish, which is a refreshing change from the epic, even scary graphics at times that these sort of slot games have. The dragon too is not very threatening – it looks like a peaceful character that is sleeping on a giant pile of treasure, but wants its beauty sleep more than the treasure.

The video slot game is set inside a purple cave, with a rocky roof, and purple stones on either side. The bottom of the screen has a huge pile of gold that stretches across the screen, while the dragon has green scales, purple eyes and little teeth that stick out as he sleeps, which actually makes him seem more cute than threatening.

In Flamin’ Elle slot the reels are also purple, with symbols such as dragons, crowns, and standard playing card icons showing up. The graphics overall are quite fun, and a welcome change from the more brooding offerings we often see in this genre.

There are six reels in in Flamin’ Elle slot, with four rows and 40 paylines in total. There is an autospin feature for those who want to save some time, with the bet level needing to be set before it can be activated.

Players can pick up wins by landing at least three matching symbols on the reels. In Flamin’ Elle slot the Wild and Scatter work as normal – the Wild will substitute for any other symbols other than the Scatter to increase the chances of winning combinations, while the Scatter can help activate the bonus free spins round.

Landing at least three of the scatters, which is a dragon egg with gold coins embedded in it, will trigger the free spins round. You win seven free spins, while if you had four or more of the scatters on the reels, you also win a multiplier – 5x, 20x or 50x of your bet, for 4, 5 or 6 scatters respectively. Further, the round can be retriggered as well, with three to 15 additional free spins being awarded for landing scatters.

Before this online slot starts, you will see a screen with four dragon eggs – pick one to determine which free spins bonus you get –

Flamin’ Riches: the dragon will blow fire across the reels on each spin, which will generate a number of random wilds. The last spin will see Elle (the dragon) bring out a flamethrower to burn up the reels, where 10 wilds will land.

Blaze It Up: This is a better version of Flamin’ Riches – the same mechanic occurs, but if a win does not take place after the wilds land, Elle will blow flames again to increase the wilds by 1. This will happen till a win occurs.

Hot or Not: The Flamin’ Riches mechanic will only trigger randomly, not on every spin

Heat is On: Anywhere between two and six paired wilds are added to the reels on every spin

Flamin’ Elle slot is a refreshing take on a pretty common video slot theme, with the bonus game being quite attractive and sure to pay out some decent wins, while the goofy dragon should keep you entertained as well. Try it here at Las Vegas Casino.