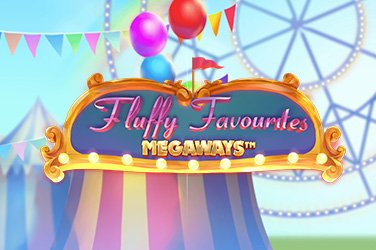 With a maximum win of 46,656 winning ways, Eyecon have taken the fun element of a funfair to the classic online slot game scene with their Fluffy Favourites Megaways slot game.

As soon as you load Fluffy Favourites Megaways online slot game, bettors will instantly know that they are at a funfair as the background provides a truly vibrant and well-designed image of what could be expected.

Behind the playing grid, players will notice there are a number of different tents available, as well as some brightly coloured balloons, a Ferris wheel and a rainbow that is dotted around to help to continue the fun vibe.

There are a number of fluffy cuddly toys available on the paytable of this Fluffy Favourites Megaways, each of which would be expected to be won when at a funfair playing certain games. Included on the paytable of this game is a fish that looks like Finding Nemo, a duck, a rhino, a horse, a turtle, a lion, a panda. a bear, a dragon that looks similar to Spyro and a hippo.

Furthermore, there is a pink elephant that also helps you payout some nice rewards but its main feature is acting as the game’s scatter, but more on this later.

The playing grid of this Fluffy Favourites Megaways from Eyecon features a total of 5 reels and the potential of 5 symbols being available to land on each reel. However, these can be rather random, as the ability of just two can appear at any time. There are a total of 46,656 different winning ways available in this online slot game.

Eyecon’s Fluffy Favourites Megaways online game features a number of bonus features with the cascading reels just one of them. Whenever a win is achieved, the icons involved in the combination will disappear, allowing for new icons to fall into their place, and potentially continue to provide wins in the same spin. With each cascade that happens, a multiplier will be added to the wins, thus seeing the wins increase in size.

There are also wild multipliers, which are triggered by the claw symbol. This symbol can substitute for any other icon available on the slot game, whilst it can also provide a multiplier that can be added to any winning combination that occurs.

Las Vegas Casino players are able to play Fluffy Favourites Megaways video game from Eyecon for as little as €/£/$0.20 per spin, although a maximum of just €/£/$10 is allowed.

The return to player (RTP) rate of Fluffy Favourites Megaways is 95%, which would be considered rather low. However, with a medium volatility level provided, video slot players will feel as though they can win a sufficient number of times.

The addition of wild multipliers and cascading wins, plus increasing multipliers, as well as the free spins bonus rounds, help to make this Fluffy Favourites Megaways slot game a rather fun online slot to play.