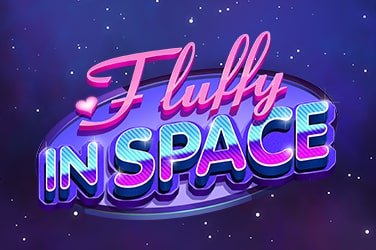 Fun is always on the agenda when you browse Las Vegas Casino’s collection of slot games and among the many gems to be discovered in our catalogue is this entertaining entry to the Fluffy series by highly-rated Australian games developer Eyecon.

The Fluffy In Space slot game takes the popular features of the other Fluffy games and recasts them in a space setting. This is a 5-reel and 25 payline game that can be considered medium volatility, with an excellent 96.36% RTP and a range of coin sizes from $/£/€0.01 to $/£/€0.50.

Fluffy In Space online slot includes all of the much loved stuffed animals taken from the Fluffy series, including the character of Nellie the Elephant, as well as the dragon, hippos, spaceship, panda and gorilla, though this time they are all wearing spacesuits. In the Fluffy In Space slot game there has been a significant upgrade in the quality of the graphics on show, and the combination of the neon colours and the intergalactic theme produce a stunning effect, although the soundtrack of this slot doesn’t add greatly to the experience.

Eyecon games regularly feature a number of player-friendly bonuses and Fluffy In Space online video slot is no exception, thanks to the Fluffy In Space feature. As mentioned above, this is triggered by bringing up three or more of the Nellie symbols on the central three reels. Immediately, you are rewarded with three Free Spins and the Nellie icons that initially triggered the bonus feature turn sticky, remaining in place throughout the duration of the Free Spins round.

In this online slot it isn’t possible to pick up payline wins during the Fluffy In Space bonus game, but each time a new Nellie icon appears during the bonus, it turns sticky and stays in position, at the same time, resetting the remaining Free Spins level to three. This entertaining feature of Fluffy In Space continues until all of the Free Spins are used up or the reels are full of Nellie symbols. And, as an extra bonus, at the end of the bonus game, each Nellie scatter provides another multiplier contributing to the final bonus payout.

In the Fluffy In Space slot game it is also possible to trigger a Free Spin award by lining up three or more of the Planet symbols. This earns you 6 Free Spins, and batches of three more Free Spins can be earned during the bonus.

Fluffy In Space slot is one of those slot games that will not only keep you entertained with a solid mechanic and plentiful bonus opportunities, but it will also make you smile, thanks to its charming theme and delightful graphical impression.