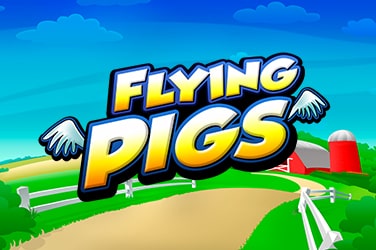 Flying Pigs by Playn’ GO is a bingo video slot game that has players able to win up to 1,500x their bet when a full house has been achieved!

Play’n GO’s Flying Pigs online slot game is a bingo game, with each game played being able to have up to 4 playable cards.

This game has provided players with a rather fun theme and one that has been helped via the use of some cool cartoon graphics and visuals that help to add to the excitement that can be had by those playing at Las Vegas Casino.

Players will notice a farm as the game’s background, whilst they will also be able to see some nice blue skies, thus further adding to the relaxing and enjoyable vibes that this Flying Pigs online video bingo slot game provides.

Although there are no exact paylines or reels in the game like traditional slots, Flying Pigs offers players the chance to win in a number of various different ways. With plenty of different combinations possible, stakes of varying values can be won which include:

Flying Pigs video slot also includes a bonus round that can be triggered by hitting some of the high-value patterns. This happens every time you create a large square or pattern of rails in any game.

When that happens during the game, not only will you win a very large prize related to that pattern, but you’ll also jump into a round of the second screen where you will be tasked with moving the pigs to a fenced area. Every time you move the pig you will be rewarded with instant credits. This continues until the boar is discovered, which ends the game immediately, after which you collect your rewards. With a bit of luck, you can win up to 625x your bet!

If you happen to be about to win x8 or more during the game, it will trigger the Extra Ball function. You will have the possibility to purchase up to 12 additional balls. The cost of the extra balls will vary; depending on the possible winning amount.

The game has a return to player (RTP) rate of 93.7%, therefore making the slot machine game a potentially lucrative one that can help to keep the interest of a player for a longer period than some other casino slots can.

Las Vegas Casino players looking for a quality online bingo slot game experience will love this Play’n GO offering of Flying Pigs as it provides a rather fun feel and vibe to those that are trying to collect as many numbers as possible and form one of the winning combinations above.

The game is simple to play and anyone at Las Vegas Casino can start enjoying it as soon as they load it up!