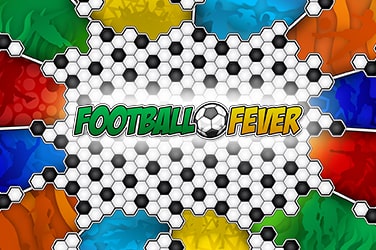 Football Fever online slot game will have fans jumping around and screaming with joy when they are able to obtain the free spins and the multiplier wins that are available when playing at Las Vegas Casino!

Genii have gone down the football route with their Football Fever online slot game, although this inspired game will likely have Las Vegas Casino football fans looking to score big as soon as they can.

The game features a number of visuals and images that represent the sport of football extremely well, with the game’s background featuring a typical black and white colour scheme and pattern that would be found on a traditional football.

In addition, there are a number of symbols available on the paytable of this game that follow the football theme expertly well, with scarves and vuvuzelas (the annoying instrument made famous at the 2010 FIFA World Cup in South Africa), the pair of VIP tickets, the football kit, the football boots, the stadium, the supporter, the referee, the goalkeeper, the striker doing an overhead kick and the World Cup.

This Football Fever online slot game is played on a playing grid that consists of 5 reels and 3 rows, whilst there are no specific paylines attached to this game. Instead, Genii have decided to adopt a 243 ways to win mechanism that means players who land 3 or more identical symbols in any position on adjacent reels will receive a payout.

There are a number of special symbols available in this game, which have the ability to trigger some great Football Fever bonus features for Las Vegas Casino players cheering themselves on in this Genii title!

The first is the yellow card icon, which is the game’s scatter. Players who pick up 3 yellow cards will trigger the ‘Penalty Round’. This game will see players looking to take a penalty with a number of different targets to choose from. All they need to do is pick one and receive the prize that is hidden behind it.

The game’s other scatter icon is the whistle, which can provide a prize when 2 or more appear on the playing grid, although those that land a minimum of 3 will trigger the free spins feature that is available. Las Vegas Casino players able to land 5 of them will receive 15 free spins and an award of 150x their bet! 15x the bet and 10 free spins will be won for four icons, whereas 5 free spins and 5x the bet will be given to those who land 3.

The free spins game will see each of the wins that are formed and won be tripled in size, whilst the ‘Penalty Round’ can also be triggered, as can more free spins!

The game also has a wild symbol, which is the football and can perform traditional substitutions that can be handy in trying to form additional wins whenever possible.

Free spins and multiplying win rewards are always enough to get online slot players jumping around, but this Football Fever video slot will have football fans celebrating as if their favourite team have been able to win the league/cup!

The bonus features truly add to the overall gameplay experience, with players hoping they get to take part in a tense penalty shoot-out contest!