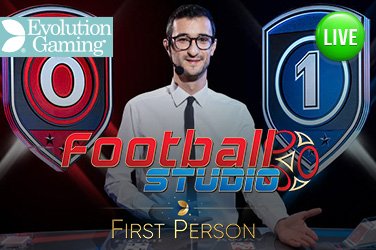 Football is by far the biggest and most popular sport in the world, and it is no surprise that its influence extends to other areas as well. Football Studio by Evolution Gaming is an exciting and interesting Live Table Game which is based on football, and is one that can really provide all the thrills of a football match within a Live Table game itself.

As mentioned already, the theme of the table game is football. It is a two-card game, allowing players to bet on the possible outcomes, while also having commentary from the biggest live football games at the same time. It live, and so the presenters will keep you updated with all that is happening in the world of football while you keep playing, so that you do not miss out on anything.

The live table game itself is quite simple: players will have a betting console at the bottom of their screens, where there will be three available options – bet on Home, Away, or a Draw. Now, these are not football matches that you are betting on; rather, ‘Home’ and ‘Away’ are the two cards drawn by the dealer, with the player having to predict which card will be higher in value. Alternatively, you can also bet on ‘Draw’, which is that both cards will be the same – this is the highest-paying option since it is extremely unlikely, which is obviously not the case in football itself. It must be remembered that you can bet on more than one outcome.

Football Studio Live Table Game Players who win their main bet i.e. who had placed bets on the Home or Away cards will double their stake if they win. The Draw bet pays out 11:1 if both cards are equal in value; however, this will be halved if the player also had a main bet active at the same time.

While this is not a bonus feature in itself, it certainly livens up proceedings and will be quite important to football fans. We are, of course, talking about the live commentary that accompanies this game. Since it is a Live Table Game, you can actually spend time chatting to the presenter as well as other players at the table about football and the various live matches going on. Various major leagues and tournaments are covered in the live game, including the Premier League, La Liga, Serie A and so on, with the World Cup next year also set to be included.

The optimal RTP for the game is 96.27%. This is based on outcomes if you have only placed a main bet. Placing only a Draw bet lowers the RTP to 89.64%.

Overall, this may seem like a simple two-card guessing live table game, but the addition of live commentary and updates from the world of football really livens things up, and will increase its appeal in a big way for football enthusiasts all around the world.

This is just one of the hundreds of top online casino games you will find on Las Vegas Casino online.