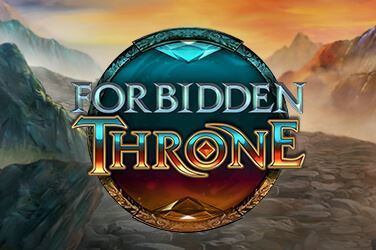 Las Vegas Casino players will be rewarded if they go into battle with this Forbidden Throne online casino game with some great bonus features. This Microgaming creation includes a large number of free spins in the video slot and our members will need to play it as soon as possible.

Indeed, the visuals that have been provided are of the highest quality with the graphics that have been used looking nothing short of spectacular; with many looking as if they can be found in a number of video consoles games.

The online slot screen looks to have been broken into two sections and combined as one with a blue mystical side on one half, as well as a bright red fiery half on the other side. There are a number of rocky areas, which suggest this battle could be in the place in the middle of nowhere.

The icons on the grid are designed expertly as well, with many of them having been provided with some rather great detail and some incredibly designed visuals that, again, would not be out of place in a top end video game.

Those that decide to play this rather mythical and fantasy-based themed Forbidden Throne slot game will find that it has a playing grid that consists of 5 reels and 3 rows as well as a total of 14 different paylines.

Forbidden Throne online casino game has a number of bonus features available in this video slot, with many of them coming via the game’s wild and the scatter icons that are available.

The first one that many may notice will be via the Forbidden Throne slot logo, as this can act as a stackable wild. There are also wild reels, which will push the action to a new level, and potentially boost payouts by a rather handsome 500x.

There is a wide range of betting options available to Las Vegas Casino players on this Forbidden Throne slot game with a minimum bet of €/£/$0.40, whilst those who’d like to bet big on the action can place wagers of up to €/£/$200 per spin.

The return to player (RTP) rate of this Forbidden Throne slot game from Microgaming stands at 96.01%.

There is no doubt that Microgaming went massive with this Forbidden Throne online casino game, however, it is something that has worked incredibly well, and will provide Las Vegas Casino players with a great gaming experience.

Indeed, the free spins feature is probably the best thing about it, as well as the graphics. But it is a slot game that simply needs to be played.