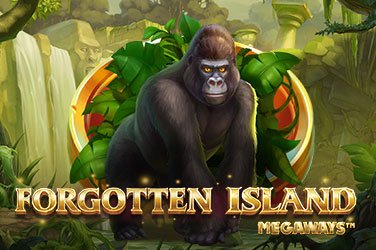 Las Vegas Casino continue to look for the best-themed slot available for their players and Microgaming and All41 Studios’ Forgotten Islands Megaways game is arguablyone of the best available at the moment.

This online casino game focuses on the tale based on King Kong and his time residing on Skull Island. Players who are successful are able to claim huge awards, with over 117,000 different paylines available.

As mentioned, this video slot is loosely based on the fable tale of King Kong and his time on Skull Island. The game’s background appears to have been set against a rock which features a waterfall on the left-hand side although King Kong himself makes an appearance and covers most of that up as he is rather animated when a win is formed. Forgotten Island Megaways’s colours used on the grid of this online casino game are bright and each of the symbols used have been designed rather well.

Looking at a paytable of this Forgotten Island Megaways slot again, All41 Studios have decided to include the traditional playing card royal values, as well as items such as books, lanterns, hooks, and a skull; which is the most rewarding icon of this video slot. The compass is the game’s wild and helps to create further wins where possible whilst the scatter is the King Kong symbol itself.

Interestingly, this online game is played on a grid that consists of 6 reels, however there are between 2 and 7 different rows in which the icons can appear on. For example, Forgotten Island Megaways slot’s reel 1 could feature just two icons however reel 5 could feature 5. Due to the nature of the way this grid is laid out, players are able to win from a huge 117,640 different paylines when they land a winning combination of 3 or more symbols. Players are able to play this game on the move as it is compatible with mobile devices whilst they are also able to customise the gameplay experience via the buttons available to the right-hand side of the grid.

All41 Studios and Microgaming have gone all out in this game as they have provided players with a trio of bonus features to help provide the massive rewards potentially on offer. The first of these features is the ‘Rolling Reels’ bonus and this is present in both the base and bonus game and can be triggered after any win. Essentially, any win that has been formed in the Forgotten Island Megaways game will be destroyed and will allow new icons to appear to try and provide further wins from that one spin.

Forgotten Island Megaways slot players are able to trigger the ‘Free Spins’ round by landing at least 4 of the scatter icons on the grid although any extra icons that land will provide a further 2 spins on top of the 10 that are initially awarded. The game’s win multiplier will come back, starting on 2x and will remain for the whole of the feature whilst the multiplier will increase for each win. When a further 4 scatters appear extra on the reels during the feature, players will receive more free spins.

There is a final feature available to players playing this Forgotten Island Megaways slot game which comes in the form of a ‘buy’ feature. Players will have three options that they can choose from which will cost various prices and are as follows:

Players are able to play from as little as €/£/$0.20 per spin and place a maximum bet of €/£/$20. This Forgotten Island Megaways slot has a high volatility level and comes with a return to player (RTP) rate of 96.25% which can be considered rather high compared to many other slots available.

Forgotten Island Megaways slot game has plenty to offer players as they are able to make some big rewards for themselves when things go their way. With over 117,000 paylines available and some great bonus features that can continue to be re-triggered, playing this online slot game with King Kong at Las Vegas Casino is highly enjoyable and one we recommend.