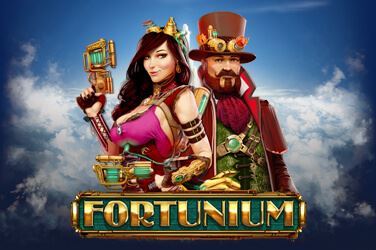 Brought to you by Microgaming, this is one of the best-looking video slot games out there, with a steampunk vibe and various attractive features for fans to check out.

As stated earlier, this game has excellent visuals and graphics – the aesthetic is a very attractive one, with steampunk influences and a blend of retro and modern influences, as characters in Victorian clothing show up against the backdrop of a modern, futuristic city.

The two main characters of the Fortunium slot game, Victoria and Maximilian, show up on the reels, as do airships, treasure chests and guns, among others. All the icons are well-designed and look quite attractive, which adds to the overall vibe of this title.

This is a 5×5 reel game, with 40 paylines, with all of the paylines being active at all times. In the Fortunium slot, wins are generated by landing matching symbols across an active payline, from left to right. The playing card suit icons (diamonds, hearts, spades and clubs) are the low-paying symbols, with the aforementioned character and item icons being the high-value symbols.

All game’s symbols are double stacked, which increases the possibility of winning combinations, while the two main characters are stacked five at a time.

The letter W, in gold, is the game’s Wild symbol, which substitutes for the other symbols, and is also the highest-paying symbol if it lands in a combination.

In Fortunium there is a Mystery symbol in this online casino game as well, in the form of a question mark, which is generated randomly during spins, and can turn any of the symbols into a super-stacked one.

The Win Booster option of the Fortunium video slot game allows you to wager 50% more of your stake to ensure that only wilds and the higher-value symbols are stacked. This can help improve chances of big wins as well.

Players have the option to autoplay as well, with a preset bet to keep the reels spinning.

The scatter symbol for the game is a glowing green orb, within a piece of steampunk machinery. Landing at least three of them among the slot reels will begin the free spins round, with 10 bonus free spins initially, as well as Mystery reels added.

The number of Mystery reels in the Fortunium slot will depend on the number of scatter symbols – 3 of them will give one reel, 4 will give two, and 5 will create three of them, full of stacked symbols. Additionally, any time the scatter symbols lands during the free spins round, you are given one extra free spin at the end of the round.

Fortunium is a stunning online slot game in terms of visuals, which should definitely keep players engaged, but there are also a number of ways to pick up wins, both big and small. The steampunk theme makes Fortunium slot a slightly unique game, and so we can expect fans and slot game online enthusiasts to have a great time on this offering from Microgaming.

If you enjoyed playing the Fortunium video slots, then you have to check Las Vegas Casino top selection of slot games to take part of the ultimate online casino gaming summit.