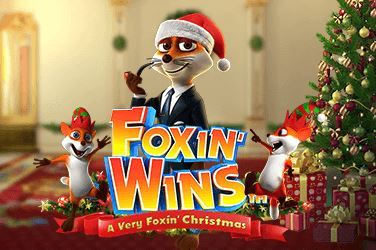 Foxin’ Wins: A Very Foxy Christmas is a festive slot from NextGen Gaming and part of the wider Foxin’ series, which includes titles like Foxin’ Wins, Foxin’ Twins, and Foxin’ Wins again. It’ll no doubt appeal to fans of the Foxin’ series, as well as players looking for a new Christmas slot to add some variety to their slot playing for the holiday season. It’s a bright and fun slot game with 3D cartoon foxes frolicking around the reels, which are set in the grand, red-carpeted halls of Foxy Manor.

There’s also a Random Bonus feature on this game, which can award cash prizes at random after any spin – the perfect gift for Christmas – and a Super Bet wager, which gives players the chance to bet a little more cash per spin to add more Fox Pups to the reels.

If you like to play your slots on the move, you’ll be pleased to hear that Foxin’ Wins: A Very Foxy Christmas slot game runs smoothly on mobile devices, including both iOS and Android tablets as well as smartphones. This is great news for players looking for a video slot to play en route to do their Christmas shopping.

With a return to player of 95.61%, Foxin’ Wins: A Very Foxy Christmas video slot game isn’t the best Christmas present in the world. This is a little below average for a slot of this kind, and players keen to maximise profits might choose to look elsewhere. That said, most Christmas slot games don’t offer top RTPs, and it could be a lot worse.

Foxin’ Wins: A Very Foxy Christmas is a nice slot game and a good shout if you’re looking for something to play to get you in the mood for the holidays. There are some better Christmas slots out there, like NetEnt’s classic Santa vs Rudolf, but as far as Christmas slots go, NextGen has produced a fairly decent one. It’s just as cute and fun as the previous titles in the series, but with an extra dose of festivity.

It’s time for a try on the best online slot games right here at Las Vegas Casino. Visit our live slot games page and get ready to win.