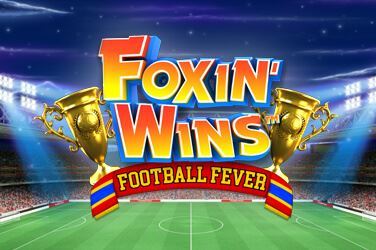 NextGen Gaming’s ever-popular Foxin’ Wins series of online slot games has yet another new addition, with this new title called Foxin’ Wins Football Fever, which is an Association Football themed slot game. The slot game includes all the well-loved fox characters from the other titles in the series and carries the SuperBet option that is immensely popular among gamers looking to bet big stakes in return for massive payouts.

Aside from the football aspect, the background to this slot game is the same and features our aristocratic fox characters living life to the full in varying scenarios and in this slot game they are off to the big match. Football fans will love the soccer element to the story which features symbols of mother fox leaning out of a car whilst waving a flag, the two younger foxes playing football in a back garden and a statue of a fox kicking a ball.

The 5 reels and 3-row setup offers as many as 25 paylines that are set to a background featuring a football stadium. Foxin’ Wins Football Fever online slot offers a Return to Player of 95.61%, which is well within the industry standard for this type of slot game. The maximum payout is $/£/€ 100,000 which can occur during the free spins round should you be lucky enough to land enough winning combinations.

The SuperBet feature is one that is popular amongst those slot gamers who have played one of the Foxin’ Wins online slot games before and allows the user to receive more wild wins but increases the stake by either 10 or 25 coins depending on which option you choose.

The pot of gold scatter symbols launch 10 free spins, and during the free spins round the fox pup wild symbols will appear more often giving you the chance to land plenty of big wins, especially as all wins are doubled during this round.

Both the wild and scatter symbols also have their own payout, with five wild symbols giving you a return of 2,000 coins, whereas landing five scatters will give you a payout of 100 coins in addition to any winning combos you land.

Foxin’ Wins Football Fever is sure to attract those who have played Foxin’ Wins games before, and who enjoy football-themed video slots games. The payouts are impressive, and the SuperBet feature is another feature that will appeal to those high rollers who are looking to land that massive jackpot.

Check this and other great slot games, live casino and table games at the glamourous Las Vegas Casino.