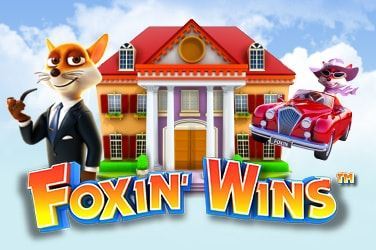 Foxin Wins is a bright, animated slot game from NextGen which has been popular enough to lead to multiple sequels including a follow-up, a Christmas Edition and a football-themed slot, too. The Foxin Wins slot game’s reels are set inside the Fox’s grand country home, with symbols including various members of the Fox family as well as the family mansion and rolls of cash. It’s a cute slot, and the features aren’t too bad, either.

Foxin Wins is a 25 payline slot in which players line up matching symbols across these paylines to win. The highest paying basic symbol in the game is Mr Fox in her red car, which pays out between 3x and 1000x the bet for two to five symbols on a payline. Five Fox mansions will pay out 500x the bet, while five A or K symbols will pay out 200x the bet. There’s also a Mr Fox Wild symbol, which pays out a whopping 2000x the bet for five symbols on one payline.

There are a few features going on in Foxin Wins video slot for players to take advantage of and up their winnings. The first is an optional Superbet mode, which lets players make an extra wager to unlock Fox Pups on various reels. Fox Pups can turn symbols wild on any spin, so these are valuable to have.

There’s also a classic Free Spins mode on Foxin Wins slot game which is triggered when three or more Pot Scatter symbols appear anywhere on the reels, awarding 10 free spins. This can be a pretty lucrative round since wins are doubled and Fox Pups will appear on the reels more frequently.

Finally, players can be awarded a Random Bonus on Foxin Wins video slot after any spin from either Fox Funds or Leprechaun Shakedown, and these both award one time bonuses multiplied by the current total bet. A rare but nice bonus to look forward to.

Players who like to play on the go will be happy to hear that Foxin Wins slot game runs smoothly on mobile devices including both smartphones and tablets. It looks good, loads quickly, and plays well across both iOS and Android devices.

Unfortunately, Foxin Wins video slot doesn’t have a super RTP. The game’s average return to player is 95.6%, which means that for every $/€/£100 players spend on the reels they might win back an average of around $/€/£95.60. This is a little below average compared to other slot games, and while it shouldn’t be too offputting to players who really enjoy the slot, it’s certainly not going to draw any new players in.

Foxin Wins is a nice looking online slot with some interesting features: Free Spins can be pretty lucrative, and the Superbet option is worth taking if you’re trying to maximise profits and prepared to up your wager to do so. If you enjoy the Foxin Wins slot game, it’s also worth trying out some of the other Foxin slots by NextGen, which boast similar designs and features to the original.