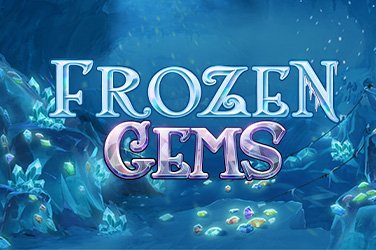 Play’n GO have provided players with an ice-cold themed slot day with their Frozen Gems slot game which Las Vegas Casino players will certainly enjoy when they take it for a spin.

Perhaps inspired by the film franchise ‘Frozen’, this initial 243 ways to win slot game features a number of bonus features that can provide players with some top prizes and plenty of enjoyable moments.

Unsurprisingly, this video slot features an icy theme that can be found throughout. Frozen Gems game appears to have been set in an underwater cave of some feeling as there is an icy blue colour that runs across the whole screen. Furthermore, there are a number of gemstones that appear littered to the side of the walls whilst the playing grid features a gold trim.

There are a number of icons available on the paytable of this Frozen Gems online casino slot game with things such as the traditional royal playing cards, the four gemstones that are green, purple, red, and orange whilst there is a golden W that represents the games wild symbol.

Players will notice that this online slot is played across a traditional grid that consists of 5 reels and 3 rows in which the aforementioned symbols can all appear. There are 243 ways to win instead of traditional paylines, whilst the game also features a cascade system which kicks in when at least 3 matching symbols form from the left to the right of the grid. Furthermore, the win lines in this video game can increase to a maximum of 8,748 once the bonus features have been triggered. Players are able to play Frozen Gems online video slot on a mobile device whilst Play’n GO have provided their traditional slots panel at the bottom of the grid.

Players who look to play the video online slot will likely notice thereel that sits above the game grid. Frozen Gems’ reel consists of 5 bonus symbols that can come into play when winning combinations have been formed. On each spin, the bonuses will all carry the following combinations,

Frozen Gems slot players who managed to land three consecutive winning symbols on the same reel in the same sequence will be provided with the respective bonus symbols:

As mentioned earlier, Play’n GO have provided players with the chance to win up to 8,748 different ways and this can happen once the number of game symbols have been split with the help of the split in modifiers. Each win that is triggered will activate the cascade feature which will remove symbols from the grid once they have formed a winning combination and allow new icons to full and potentially form even more. Frozen Gems video slot game players will also be able to make the most of a win multiplier that starts at 1x and each cascade will increase it by 1.

The final feature of this Frozen Gems online slot by Play’n GO is the ‘Free Spin’ game. Players will be rewarded with9 free spins when they land 3 scatters on the playing grid whilst they will also receive a reward of 5x the bet. Any extra scatters that appear will award an additional 5x prize. Furthermore, the win multiplier will be carried over to the start of the round and any further scatters that land will provide an additional one free spin.

Las Vegas Casino players who want to play this Frozen Gems slot time can play from as little as €/£/$0.20, although the maximum bet available is €/£/$100 per spin. The Frozen Gems game has provided a return to player (RTP) rate of 96.34% and comes equipped with a high volatility level, thus potentially meaning big wins can be made.

Frozen Gems slot game by Play’n GO is a top-quality game and one that provides players with a number of great bonus features as well as a whopping 8,748 ways to win as well as a maximum win of 10,000x the stake. Add to that the great bonus rounds of free spins, players certainly won’t feel as though the heat has been turned down in this Las Vegas Casino slot game.