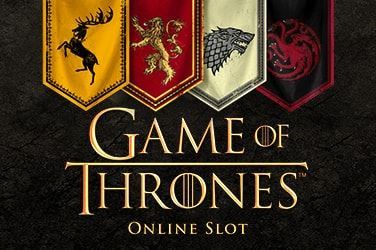 The smash hit HBO television series took the world by storm, so it is perhaps no surprise that this was one of the most eagerly anticipated slot games for online casinos. With such a huge fan following for the show, the slot game had a lot to live up to – and it wasn’t disappointing! Our full review explains the ins and outs of gameplay, including what kind of returns and bonuses you can expect when you play the Game of Thrones slot game with Las Vegas Casino.

Produced by the well-known game designers, Microgaming, this particular slot game offers a user-friendly interface, with attractive graphics and easy to understand gameplay.

Game Of Thrones video slot game offers a fairly typical online slot set-up, with five reels and three rows. Fans of Microgaming’s other online offerings will recognise their characteristic style and great graphics. The various combinations of paylines mean that there are a total of 243 ways that it is possible to win on each spin.

Game Of Thrones slot game’s reels feature standard playing card symbols, from Jack to Ace – with a potential 2X multiplier for the Ace. You’ll also see the four symbols of the most powerful houses in Westeros; the Targaryen dragon, the Lannister lion, the Baratheon stag and of course the Stark wolf. If you land a five of a kind combination of these game’s symbols, you will be rewarded with some impressive stake multipliers – up to 8X.

Finally, when playing this slot game you can expect some added drama from the stacked wild card, which can substitute for any symbol, upping your chances of forming a winning combination.

Of course, one of the biggest thrills in any online slot comes from the exciting free spin rounds. In this case, it’s triggered by the scatter symbol – represented, of course, by the iron throne. Find two scatter symbols in one round and you will win a random cash prize of up to 50x your stake. Three or more scatter symbols and you’ll see the free spins selection feature!

You’ll get a choice of four featured free spin rounds at Game Of Thrones video slot;

Baratheon: You win eight free spins with a 5x multiplier for all wins, and a three -symbol stack on the Baratheon House stag symbol.

Lannister: This option means 10 free spins with a 4x multiplier, and a four-symbol stack of the Lannister Lion.

Stark: 14 free spins and a 3x multiplier on all your winning combinations, and a five-symbol stack of the Stark wolf.

Targaryen: You’ll get an impressive 18 free spins and a double multiplier of all wins. You’ll need a six symbols stack of Targaryen dragons to win massive prizes.

Finally, it’s worth knowing about the slot game’s Gamble Trail feature. This will pop up when you get a win, and offers you the chance to double your winnings on the Game Of Thrones slot game. Every time you successfully win the coin toss, you’ll progress through the in-game ‘map’ taking you to four different locations with the Game of Thrones world.

Game of Thrones has a Return to Player (RTP) of 94.86%. This is roughly in line with the industry average, although it isn’t uncommon to see games with an RTP of 96% or so – so overall it’s in the middle of the range when compared to other popular games. It is rated as a low-medium volatility game. Generally, this means that casual slots gamers will enjoy being able to experience a series of small to medium wins over a relatively short period of time playing. Of course, there will also be the occasional big win in this slot game, so more experienced players can still find it a rewarding experience too.