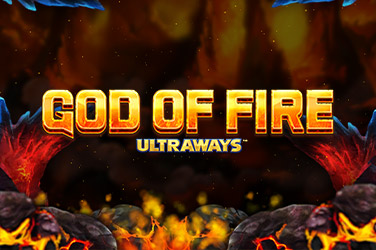 God Of Fire Ultraways is a 5-reel slot game developed by NorthernLights, a Microgaming partner. The Demo Play option on Las Vegas Casino lets you play the online slot game for free if you want to test it before playing with real money.

The background of the game has an energetic look with the God of Fire, Hephaestus on the left side of the slots. This online casino game has fiery animations, molten lava sounds and background music that are so intriguing and let you concentrate more on the game. Each symbol in the game is neatly designed and the transitions, animations are captivating to the eye.

God Of Fire Ultraways is a 3-row, 5-reel online slot game that uses Ultraways which makes up to 60 million ways to win a possibility. Landing at least 3 matching symbols on the adjacent reels from left to right will award a win.

The online slot game has 8 symbols out of which Hephaestus pays the highest, followed by a Trojan Helmet, a Column and a Vase. The symbols A, K , Q and J pay the least. Each of these symbols land in different sizes in each position.

The slots’ Ultraways feature exponentially increases the ways to win by splitting symbols that would have been a single symbol into 4 of the same type. The payouts are small even when there are 10 matching symbols (x0.5 to x1.1) but this is where the Ultraways plays its role and one can win up to x18,000 times with the help of the Wild, Blue Wild and Free Spins.

The God of Fire slot game has a Wild Symbol which substitutes for all the above-mentioned eight paying symbols and landing nine such matching symbols will pay x1 times the stake.

The Bonus Symbols are Scatter symbols and landing 3, 4 or 5 Bonus Symbols will award Free Spins with 3 Lives, 4 Lives or 5 Lives respectively. Landing a Gain Life symbol (a heart symbol) on slot reel 5 will increase a life and landing a Lose Life symbol (a Skull symbol) on slot reel 5 will remove one life. The slots game free spins will go on until you run out of lives.

On each Free Spins, a special symbol may randomly land.

– Exploding Wilds – The Blue Wild replaces a symbol on the reel.
– Upgrade – Ultraways is upgraded on a random symbol which increases the number of win ways.
– Multiplier – x2, x3, x5 or x10 multiplier is applied to all the winnings on that spin.

A bonus is guaranteed on every Super Free Spin which ends when there are no lives left.

Exploding Wilds – The Blue Wild replaces a symbol on the reel.
Upgrade – Ultraways is upgraded on a random symbol which increases the number of win ways.
Multiplier – x4, x6, x10 or x20 multiplier is applied to all the winnings on that spin.

The theoretical RTP is 96.02% which is good for a slot game.

God of Fire is an exciting slot game with some eye-catching graphics. The Exploding Wild bonus is fun to play with and the unpredictability with the number of Free Spins is breathtaking. With over 60 million ways to win and a big x18000 possibility, it holds its place in one of the best slot games list.