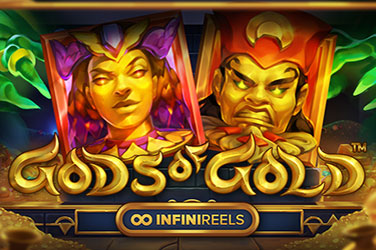 Historical events and themes are quite commonly found in online slot games, and Gods of Gold INFINIREELS, from NetEnt, is an excellent addition to this genre, and the Infireels mechanic really adds a lot of winning potential for players.

This game has a Babylonian theme, which makes it quite unique, as most similar games are based on ancient Egypt. You will be taken inside the treasure chamber of an ancient Babylonian temple, where there is an undead pharaoh lurking.

Gold and treasure overflows the room in the background, with the reels appearing on top of a blue wall. The soundtrack is inspired by the Arabian Nights to lend even more of an ambience to the game.

There is a wild symbol in the Gods of Gold INFINIREELS slot as well, but this can only land on reel four and beyond, so you need to pull off at least one win before it becomes active. The golden sun is the game’s Scatter symbol.

The various symbols on the game include four low value gemstones, along with four intricately designed characters – the owl, bull, king and queen.

The game has a 3×3 grid with 27 paylines, while the Infireels feature can add more reels to the grid to increase your winning potential. A new reel is added to the right of the grid every time you land a winning combination. The number of Gods of Gold INFINIREELS paylines multiplies by three for every new reel added, so, for four reels, there are 81 paylines, 243 for five reels, 729 for six reels and so on.

There is a minimap which helps to keep track of the complete play area and the number of reels in play, while the symbol counter shows the number of matching symbols needed to win for the symbol displayed, as well as the paylines for that symbol.

Gods of Gold INFINIREELS slot players can bet from 0.20 coins up to 200 coins per spin. The Quick Spin option can be used to autoplay up to 1000 spins, with the Advanced Settings available to set your limits for this feature.

The Respins feature can be randomly triggered when the reels stop increasing and there are no winning combinations formed, and here, you receive a free spin that is guaranteed to result in a win.

The Multi-Slam feature is activated randomly during a win, where two or three reels are added to the grid, rather than just one, and it is also guaranteed to result in a win on the following spin.

Landing at least three of the Gods of Gold INFINIREELS game scatter symbols will trigger the Win Spins feature. Here, you receive at least 10 win spins, with an extra five spins for every further scatter landed, so you would have 20 spins for landing five scatters, for example.

These spins are free spins that are guaranteed to result in wins, thereby increasing the size of the grid and the number of active paylines.

This is a very interesting and innovative slot game from NetEnt, which uses the Infireels mechanic to provide a lot of winning potential in the base game, while the bonuses are also all quite lucrative.

This is a very interesting and innovative slot game from NetEnt, which uses the Infireels mechanic to provide a lot of winning potential in the base game, while the bonuses are also all quite lucrative.

Play the latest online slots like Gods of Gold INFINIREELS and find our featured slots with our top online casino experience.