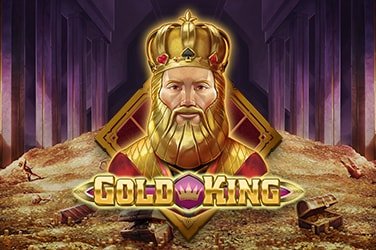 Gold King is a historically themed slot from Play’n GO in which players take on the role of a mighty king, hoarding gold in his palace. The reels are packed with gold, crowns, and jewels, and in the background players can see a great hall filled with piles of gold and treasures. It’s a fun slot and Play’n Go have packed it with features to keep things interesting.

The basic rules of Gold King revolve around its being a payline slot with 20 paylines in play. Players line up matching symbols on the reels, hoping to match two or more of a kind on a single payline to win money. The highest paying standard symbol in the game is the golden crown, which pays between 0.2x and 25x the bet for two to five symbols on a payline. The purple gem and the gold bar pay up to 18.75x and 12.5x the bet respectively for five on a payline, while lesser valued A-10 symbols pay up to 2.5x to 5x the bet for five.

This is where Gold King gets really interesting. The game offers a Free Spins mode with tons of bonuses included, which really helps it to stand out from the crowd. 10 Super Spins are triggered when players land three of the Gold King Scatters anywhere on the reels, with the option to trigger more during the bonus round. During Super Spins, Wild symbols appear in stacks of 6 or 7 on each reel, the gold, gem, and crown symbols that land expand to fill all three spaces on the reels they land on, and basic A-10 symbols are stacked in piles of 8.

On top of this, on every spin in the base game, one normal random symbol will be randomly selected to fill 12 consecutive spaces on each reel, which means it’s easier than ever to land stacked symbols even during standard gameplay.

For players who like to play slots while out and about, Gold King slot game is a great choice. It plays smoothly on mobile devices including both tablets and smartphones and whether you’re on an Android or iOS phone, there shouldn’t be any issues with this slot.

The return to player of Gold King video slot is 94.54%. This is where the game does fall down a little, being significantly lower than the average of about 96%. Players who are dead set on playing for money need to bear this in mind before spinning the reels. It’s also a high variance slot, which means wins don’t come in too often, and players need to be prepared to spin for a while before landing a small windfall.

Gold King isn’t that much to look at, but the Super Spins round is packed with extras which make it a lot of fun. It’s definitely where most of this slot’s wins are, although with a lower than average RTP that might not be enough to make this slot worth playing for more serious players.

Are you looking for something a little more fancy than Gold King slot game? Try Las Vegas Casino Featured Games.