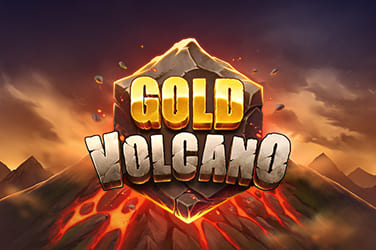 This is a fun, cluster-based slot game from Play’n GO, which uses a volcano as the theme for its pay mechanics, and has a number of features to keep the gameplay entertaining and rewarding.

The island of Cash-a-Mundo is where you will find yourself in the game, where the Gold Volcano has lain dormant for thousands of years. The reels themselves are set on the volcano’s central chamber itself, expanding as you keep going lower.

The Gold Volcano online slot low value card suit symbols are encased in stone, while the four precious stones are the game’s more valuable icons, with the gold symbol being the most lucrative, paying out 1000x for 30 or more on the grid.

There are also 2 wild symbols in the game – the standard wild substitutes for all other symbols on the Gold Volcano game reels, other than the scatter, while the second wild also replaces all the other symbols, but also adds a 2x multiplier. The second wild only shows up in the Pressure and free spins bonus rounds, while the volcanic rock icon is the game’s Scatter symbol.

The slot has 8 reels, and uses a cluster pay mechanic. There are 3, 4, 5, 6, 6, 5, 4 and 3 symbols on each of the respective reels, which are shaped like the volcano, as mentioned earlier. Landing at least four matching symbols in a horizontal or vertical line will give you a win, and in case of multiple clusters on the same spin, only the highest value cluster is paid out.

Gold Volcano slot players can bet from 0.20 coins up to 100 coins per spin, and can use the Autoplay option as well for up to 100 spins, with the various win/loss limits, single win limits and so on available in the settings menu to customize the Autoplay experience.

The Cascading Reels feature is triggered every time a win is generated, with the winning symbols being removed, and new symbols being added via the lava onto the Gold Volcano slot grid, to increase your chances of picking up even more wins on the same spin.

On any non-winning spin in the base game, the Dormant feature can kick in, where any one of three effects can apply. These are –

Rumble – all symbols are moved into new locations on the reels, with one of them being replaced by a scatter

Lava – lava erupts from the volcano and spews out a random symbol that cascades onto the grid, and it can be a wild as well. The layout of the reels also changes to give you more chances of winning.

Excavate – three to five wilds are added to the grid randomly

The Gold Volcano slot game Pressure feature is activated when winning symbols are removed from the grid. A wild is generated in one of the empty spaces before the new symbols drop in, and these Wilds can also have a 2x multiplier.

Filling the reels with the scatter symbols triggers the Crystallisation feature. For every three scatter symbols collected, the feature will upgrade a random precious metal symbol to the gold symbol. There are three levels to this, all of which require three scatters to fill, and the meter resets after every spin in the base game.

The Eruption feature is activated when you get six consecutive cascades, with no more further wins. You get five free spins, with these being played on a 8×8 grid.

The volcano will erupt after every free spin to spew out more symbols and fill up the grid, and the feature can be retriggered as well with 1 extra free spin awarded for six cascades. The Gold Volcano slot Crystallisation feature is also active, which means that the meter does not reset between spins, along with the Pressure feature.

This is a medium variance online slot with an RTP of 96.2%

This is an interesting Las Vegas Casino online slot, as it has a number of features not previously seen in their games. The sheer number and variety of bonus features makes the Gold Volcano video slot quite an attractive and rewarding game, with interesting graphics and mechanics to keep you entertained as well.