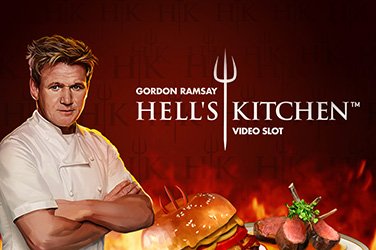 Gordon Ramsay’s Hell’s Kitchen online videoslot features some rather impressive and stunning graphics and visuals that help to bring this game to life.

Videoslot players will feel as though they are facing the heat of the kitchen as there is a vibrant red that burns off the screen, whilst many of the animations help to fit the theme expertly well.

These include some of the traditional royal playing card icons that appear to be burning as they glow with red, whilst there are also a number of food items that can make players crave something to eat. These include expertly designed desserts, drinks, burgers, and a slab of beef.

Those who decide to play this Gordon Ramsay’s Hell’s Kitchen online videoslot from NetEnt will find that they are greeted with 5 reels and 3 rows, whilst there are a total of 20 paylines available.

Players are able to adjust their video slot gameplay experience by the game panel at the bottom, where there are a couple of functions that can be used to customise the gameplay on offer.

NetEnt have taken a number of things from the TV show and have been able to turn them into special bonus features for this Gordon Ramsay’s Hell’s Kitchen video slot game.

The first of the bonus features in this videoslot is the ‘Team Challenge Free Spins’ game, which will see Hell’s Kitchen slot players be provided with at least 10 free spins if they land at least 3 scatters. Those that land 4 will win 15 free spins.

In this online slot, two sets of reels will be provided – one for the red team and one for the blue team, although players will need to choose which team they are on before the round starts.

During the bonus, videoslot players will notice that special icons will appear below the reels in either red or blue. This will include items such as multiplying wilds and additional wilds. At the end, Hell’s Kitchen players will collect wins from both sets of reels, but the team who wins the most money will be able to enter Gordon’s Bonus Game.

This special bonus game will see players have 15 menus that they will need to pick from in order to obtain a prize. These prizes include payouts such as 2x, 3x and 5x, whilst there are also 2x and 3x multipliers on offer.

The bonus feature will come to an end when three of the same one has been selected and will instantly be added to the bankroll.

The return to player (RTP) rate of this Gordon Ramsay’s Hell’s Kitchen videoslot stands at 96.07%, and comes equipped with a low volatility level, which means players can expect to win rather frequent, but low prizes on a regular basis.

Players will feel the heat of the kitchen in this Gordon Ramsay’s Hell’s Kitchen videoslot game, although they will certainly feel rewarded if they are successful. The bonus games can make the overall experience incredibly lucrative !