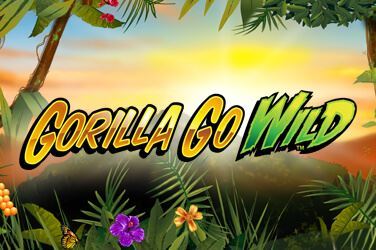 Gorilla Go Wild is an unusual slot from NextGen first released in 2015. It was popular enough to warrant a follow-up, Gorilla Go Wilder, and no doubt one of the reasons players love it so much is the slot’s cute gorilla mascot, Gary, who sits aside the reels during gameplay munching bananas and just generally looking adorable. But that’s not all this slot game has to offer – it’s got plenty of features, and it’s one of those slots that gets more exciting on every spin.

Gorilla Go Wild offers a few interesting features which are a little different compared to the usual bonus rounds seen in most slots. As Gorilla Go Wild players spin the reels in this game, Gary will sit at the side of the reels and eat bananas from a bunch every now and again. When the bunch of bananas is all eaten, Gary will move on to a different section of the jungle. The further into the jungle you get, the more regularly Gary’s Bonus Time is triggered during the game.

Gary’s Bonus Time triggers randomly on any spin, and either awards single payouts of up to 1000x your bet or entry into the game’s main special feature, Gary the Gorilla’s Feature Kingdom. This game’s feature, which can also be triggered by landing three or more Temple symbols on the reels, unlocks one of three bonuses, each of which offers free spins and multipliers. Better bonuses are unlocked the more times the game’s Feature Kingdom is triggered, which is why Gorilla Go Wild gets better with every spin.

Gorilla Go Wild may be a fun slot, but it offers a poor RTP of 92%. There’s no two ways about this: the game’s RTP is well below average compared to most modern slot games, and it means that unless Gorilla Go Wild slot game players are really lucky and land one of the game’s jackpot wins, they’ll likely make more money back playing elsewhere. Of course, if you enjoy the slot, this shouldn’t put you off too much, but it needs bearing in mind.

Gorilla Go Wild is a fun video slot game which employs some unique mechanics to incentivise players to keep spinning; it’s one of those slots which pays out bigger and better sums the longer you play for. While some players might like this Gorilla Go Wild game aspect, many casual players will be put off by this as well as the slot game’s painfully low RTP. It’s a shame because the graphics and features of the slot game are fantastic and a ton of fun to play around with.