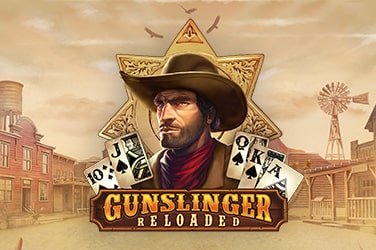 The era of the Wild West has provided the inspiration for many online slots games including this interesting title from Play ‘N Go, one of the world’s most popular games developers. It features in the comprehensive LasVegasCasino game catalogue and has developed a strong following among online slots gaming fans since it was released in 2018.

Visually, it is an impressive production. The arid and desolate backdrop to the game provides a suitable setting, and as you would expect from this company, both the overall graphical effect and the animations are excellently produced and realised.

This progressive jackpot game offers a 5-reel and 25 payline game screen. It can be played from as little as 0.25 to as much as 100, making it suitable for players with a wide range of bankrolls.

On the gameplay reels, there are some traditional symbols, namely the main card values, which serve as the lower value payouts, while the other, more lucrative icons include sheriff badges and pans full of golden nuggets. The latter symbol represents the most valuable of the regular icons and can pay out a reward of x40 your original stake if you can line up five on one payline. In this game, the Wild symbol is the Bounty Hunter, which can substitute for all of the others aside from the Scatters. It also offers an impressive x400 reward if you can land five of them.

The Scatter symbols are the trigger for the game’s additional features. For instance, the Whiskey Bottle Free Spin feature is launched when you bring up three of the Whiskey Bottle Scatters on the middle reels. In this feature, you have to shoot one of three bottles and you will then be rewarded with a sequence of up to 25 Free Spins, which can also be retriggered.

Another popular feature is the Bounty Hunt Bonus. Land three of the Wanted Poster Scatters on the first three reels and you can then launch the game. You have to pick your preferred target and then take part in a mini-game that is highly entertaining. Each of the infamous outlaws offers a different level of reward, which can be worth up to x960 your original stake.

Potentially the most lucrative feature is Shoot The Cards. Collect a winning combination of the poker cards on the main reel and you will be in with a chance of winning the unlimited progressive jackpot, if all of the cards in the feature bear the Sheriff’s Star.

Gunslinger: Reloaded rates as one of the best slots ever made by Play ‘N Go. It is a medium variance game, with potential payouts worth x5,000 and of course, the chance to land a life-changing win with the progressive jackpot. With slick graphics and a range of bonus features, there is plenty in this inventive take on the Wild West to appeal to slots players of all experience levels.

At Las Vegas Casino our focus is clearly set to provide you the best slot games from the most sought-after game providers available.