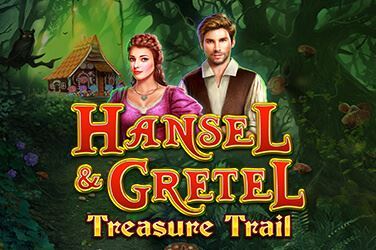 With up to 100 free spins available to win and a progressive jackpot, this Hansel & Gretel Treasure Trail slot game can provide Las Vegas Casino players with a highly rewarding adventure!

Legendary fairytale character duo, Hansel & Gretel will both go on an adventure in this Hansel and Gretel Treasure Trail slot game from 2 by 2 Gaming, with the developers having provided an expert game design that Las Vegas Casino players can look to follow.

The game takes place deep in a mystical forest that provides players with a rather cool scene and one that can fully immerse them with the characters as it is something that would be seen when they are used in a film.

There are a total of 11 different game icons available on the paytable, with the royal playing card icons being used to represent the low-value symbols. These are then followed by the huntsman’s axe, the swan, the bag of sweets and the main characters of this inspired theme.

The evil witch is followed by Gretel and then Hansel, who can provide players with a win of 500x the bet when five of him appear on an active payline!

This Hansel and Gretel Treasure Trail online slot game is different to many of the other games available to play at Las Vegas Casino, as players will find that there are mammoth 8 reels available to form winning combinations across.

Furthermore, there are a total of 60 paylines also available, thus providing bettors with a huge number of opportunities to pick up a win on frequent occasions.

There are a number of different Hansel and Gretel bonuses features available in this game, with developers, 2 by 2 Gaming, truly rewarding players who decide to spin the reels on this 8-reel game!

The first that many may notice when they start playing is the gingerbread house icon, which is the game’s wild. It has the power to replace and substitute for all regular icons on the paytable and help to complete wins, although it can not replace the game’s scatter.

Each reel will also provide players with a bonus feature as each one contains mystery symbols. These icons can be transformed into matching icons to help form new winning combinations on any given spin.

Players looking for the best Hansel & Gretel Treasure Trail bonus feature will want to trigger the free spins feature as soon as they can. This can be done by landing between 3 and 8 of the bonus scatters in any position on the reels. Players who do this successfully will be able to earn between 8, 12, 16, 20, 30, or 50 free spins, with each win achieved also being doubled throughout the duration of this game! Players are able to retrigger the bonus as well by landing 3 or more scatters, with up to 100 free spins available.

If that was not enough, this game also features a progressive jackpot that can be won on any random spin made in the game. Players who trigger this will be required to pick from drawers where they will reveal gemstones. Land 3 matching icons and players will receive one of the four jackpots on offer!

The return to player (RTP) rate for this 2 by 2 Gaming title is 96.02%, thus making it fairly reasonable for Las Vegas Casino players!

The free spins and the progressive jackpot will have instantly had players hooked as these have the opportunity to provide players with some big wins when they have been able to trigger them.

Give this game a go and see how rewarding it can be for yourself!