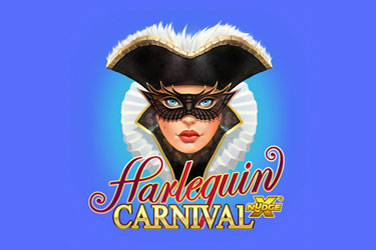 This is another example of a video slot game from Nolimit City that uses the xNudge mechanic. Harlequin Carnival is based on masquerade parties and there are several interesting and attractive features to draw your attention and potentially reward you with big prizes.

You will be taken to a palazzo’s balcony which features ornate statues and beautiful flowers, with the graphics in high definition. The soundtrack is also extremely refined, using the classic Danza Húngara No.5 number from Johannes Brahms & José María Damunt which you’ll recognise instantly. It’s fast paced and adds to the intensity of the gameplay.

The Harlequin Carnival slot symbols include spades, hearts, diamonds and clubs playing cards, as aces, which are set on a beautiful golden background. The high-value symbols are five different masqueraded characters – sun mask, moon mask, cat mask, gold plague doctor mask, and white mask. The sun mask is the most valuable of the Harlequin Carnival slot game, paying out 300x for five on a payline, and the Harlequin is the Wild – it also pays out 300x for five on a payline, but does not reward for a lower number of symbols.

The game has 5 reels, 3 rows and 20 paylines, with players able to place bets from 0.20 coins up to 100 coins per spin. Winning combinations are formed when you land 3, 4 or 5 matching symbols across any of the 20 paylines, starting from the first reel. You also have an Autoplay function in the Harlequin Carnival slot online where you can choose from 10 to 1,000 autospins. There are also customisable settings where you can stop Autoplay if a single win exceeds a chosen amount, if your balance is lower than 0%, 50% or 75% and if your balance is higher than 150%, 200% or 500%.

The Harlequin Wild symbol is three rows high, and can land on all five reels. Through the xNudge feature, it will always be visible, and will generate a wild reel. Every nudge also increases the wild multiplier by 1. If several wild multipliers appear, they are added to each other for a total wild multiplier on the payline win.

During the Harlequin Respins round, look out for the Harlequin bonus scatter symbols on the 3 middle reels. If you collect 3, you will trigger the game’s Harlequin Bonus feature with 8 free spins awarded.

A guaranteed Harlequin xNudge Wild symbol appears on slot’s reel 5 with a 3x multiplier. The multiplier increases by 1 for each step/reel to the left that the wild reel makes. The multiplier can increase up to 7x. If you collect 3 more bonus scatters, you will activate another xNudge Wild on reel 5. Each one of them gives you additional free spin.

This is a high variance game from Nolimit City, with an RTP of 96.14%

For the Las Vegas Casino team, Harlequin Carnival is one of the most beautiful slot games online, and the Nolimit City’s video slot gameplay also manages to match up to the visuals and game theme.

Our casino online managers work daily to provide you with the best and most popular slots out there. Play the top 10 slots at Las Vegas Casino.