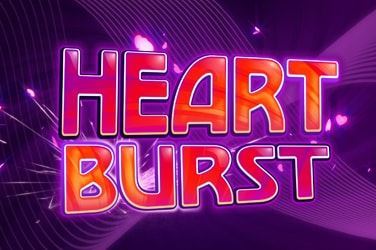 Fruit-based slot games have always been a source of excitement for players at Las Vegas Casino, however this Heartburst online casino game is a little different to the normal ones that can be found.

Created by Eyecon, this Heartburst slot game will have your heart bursting as players will be able to enjoy a large number of paylines, and a ‘Free Spins’ game all in a
game that features a high volatility level.

Nostalgia appears to be the vibe that this video slot is providing when looking at the visuals and graphics Eyecon have decided to apply. The fruits used are vibrant and bursting with colour, although they have been given a rather modern and juicy look. There is a purple background that can be seen in between the Heartburst icons, although the actual playing grid appears to have been surrounded by a black colour.

Players who decide to play this video slot will be provided with a rather traditional playing grid, with 5 reels and 4 rows having been adopted by Eyecon in Heartburst. As mentioned, there are a large number of game paylines available, with 100 to try and form a winning combination upon. Heartburst online slot paylines can be altered, though, therefore allowing as few as 1 or as many as 100 to be active. Players are able to enhance their gameplay experiences by customising the functions that can be found at the bottom of the screen.

Eyecon have provided a number of bonus features in this Heartburst online casino game, with the scatter icon being one of the most rewarding icons. Whilst it has the ability to pay out the biggest rewards, the lucky seven is able to trigger the ‘Free Spins’ game when 3 or more of them land on the reels. Heartburst players will be rewarded with a minimum of 15 free spins, although 4 and 5 will land 20 and 25 free spins respectively, which are all played out on the grid with a blue background. This bonus feature can be retriggered.

The wild icon in this Heartburst video casino slot comes in the form of the Heart icon, which can expand to cover all positions on the game reels it appears and substitute other icons to help form winning combinations; if it manages to achieve this, then it will award a prize that has been tripled in value. However, it can only appear on reels 1, 3 and 5.

The final bonus feature that Heartburst slot game provides players with is the ‘Gamble’ bonus. Players are able to try and double their winnings after a winning spin, however by choosing the wrong outcome, they will lose everything they had initially earned on that spin. A maximum of 5 games can be played in any one go.

This Heartburst slot game can be played for a minimum of €/£/$0.01 per spin, although players are able to place wagers of up to €/£/$50. The return to player (RTP) rate of this slot game stands at 95.63% and features a high volatility level.

Las Vegas Casino players will find that they have been provided with a little nostalgia when they play this Heartburst slot game as the classic fruit symbols throw them back to a simpler time. The ‘Free Spins’ bonus is a top feature and helps to bring this game to life and will help players to fall in love with the game, if they had not already.

Find more of the most popular online slots and other casino table games in Las Vegas Casino excellent experience.