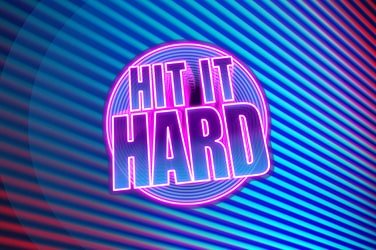 Las Vegas Casino is earning a reputation for offering some of the most inventive slots games around and Hit It Hard certainly fits that description.

Set up in 2012, Swedish game developer Elk Studios has worked hard to build up a portfolio of innovative slots titles, including their Classic Series, of which the slot game Hit It Hard is the sixth edition. Although this slot title has some similarities with the previous entry in the series, Win, in that both are based around the classic fruit machine set up, the extras here are different enough to keep you involved, with a distinctive dice-game flavor.

The first thing that grabs you about this slot game is the bold soundtrack which is firmly in the big band category, featuring a horn section and a soloing guitarist. The impressive soundtrack of this slot is backed up with some classic slot game clicks and beeps and some delightful visuals, recreating the classic retro slot game look, with a stunning and colorful impact.

This is a high volatility slot game with a respectable RTP of 96.3% and although there is a relatively low hit rate of 15.9%, this is offset by the abundance of multipliers and bonuses. The simple three-reel, three-row layout is stripped back and in keeping with the retro feel, there are just five paylines.

The reel symbols are the classic fruit machine icons, including the low paying lemons, cherries and watermelons and the medium-paying red, blue and green bars. To land the bigger payouts, you have to bring up the three Number 7s in red, green and blue, which represent a payout of up to x50 your stake. There is also a Wild symbol that can also be boosted by a multiplier.

The big feature of Hit It Hard slot game is the bonus game, which you will see above the reels. To trigger it, you simply have to land the dice symbol on the middle of the third reel. iN Hit it Hard Slot Game the bonus game is made up of 23 spaces, each with different mini-games and the game begins with a random dice roll. Depending on which space you land on, you may trigger a host of features, including Stacked Wilds, 10 Free Spins with Wilds, or Power Run, which gives you access to every Hit it Hard featured game you pass through.

Among the most interesting bonus games are Lucky Ballz, which is a version of pachinko that can land you up to x500 your stake and the Key and Vault options. Collect two Key symbols and then land on the Vault space and you will unlock the maximum win of x2500 your stake.

ELK’s Classic Series has proven a big hit with online slot game fans and they’ve hit the jackpot again with this entertaining retro-styled game, which offers sleek visuals, an engaging soundtrack and a host of bonus features to keep even the most experienced slots gaming fans engaged.