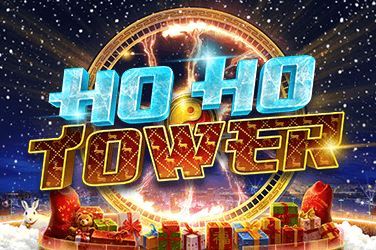 ELK Studios has a reputation for designing new slot titles, but they are also known for producing effective sequels, as seen in the popular Gold Series. So it is no surprise to find, among the wide variety of games on the Las Vegas Casino site, the sequel to the successful Hong Kong Tower slot, except this time it has a Christmas theme.

Ho Ho Tower is a 5-reel slot offering 99 ways to win with a solid RTP of 96.4%. It can be played from as little as €/£/$0.10 to as much as €/£/$50 per spin, so it should be suitable for players of all experience levels and bankroll sizes. The game takes place against the backdrop of Hong Kong and as with the original Hong Kong Tower game, the skyline is illuminated by fireworks and laser beams. This time, however, there is a distinct Christmas theme to the setting, including the use of Christmas bonsai trees, a festive looking number 7 and Christmas sweets on the reels.

The most important symbol to look out for is the ice-themed Ho Ho Tower logo, which works as the game’s Mystery symbol. When this appears on the reels, the Mystery feature is triggered. This feature sees the Mystery symbol turn into another randomly selected symbol, thereby giving you additional chances to make winning combinations.

When the bonus feature launches, three giant wheels appear on the roof of the Ho Ho Tower. As the first of the wheels spins, you can claim a reward, usually a cash bonus. There is also the possibility of landing the Level Up icon, which means you can progress to the second wheel, which offers bigger wins. In this version of the game, there is an extra slot for levelling up.

The ultimate aim in the Bonus game is to progress as far as the third wheel, where the biggest prizes are to be found, before your lives run out. With this wheel, it is possible to land a prize worth x500 your original stake, which is added to any winnings you gained on the first two wheels.

Ho Ho Tower is a medium variance slot, contrasting with the original Hong Kong Tower, which was categorised as a high volatility game. In this case, the maximum win is x1530 your original stake, compared to the x3016 prize on offer with Hong Kong Tower. Some players may prefer the original, but we were impressed with this update, and many slot fans will appreciate the fact that they are likely to win more regularly with this festive-themed slot. It’s an attractive, fun game to play around the Christmas period and a solid addition to ELK Studios’ roster.