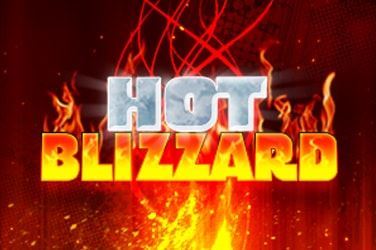 Curious about the oxymoron that is the Hot Blizzard video slot? Well, we decided to review it so you wouldn’t have to. Is Hot Blizzard a hot success for Tom Horn Gaming, or is it an icy let-down title soon to be frozen from the internet? Read our review to find out.

Despite its name, Hot Blizzard slot offers little in the form of a theme that’s either hot or cold. The backdrop to the reels is essentially a simple shade of red as opposed to any existing landscape of glaciers or snow, nor does it flicker with any fiery depth. It would have been nice to see a little more of an adventurous side regarding the game’s aesthetics, but nonetheless the priority is clearly on the gameplay itself which must be acknowledged. It’s clear that Hot Blizzard video slot has been influenced by traditional fruity slot game machines, as many of the symbols are classic lemons, grapes, cherries, or watermelons.

The providers of Hot Blizzard slot are Tom Horn Gaming, commonly shortened down to Tom Horn. Tom Horn Gaming states its main mission to make slot games that are exciting, tense and rewarding offering many titles such as Kongo Bongo, The Secret of Ba, Dragon Riches Progressive, and Blackbeard’s Quest slot game. The company has a distinctive cartoonish style that appeals to many fans.

The game’s RTP (Return to Player) rate of Hot Blizzard is 95.80%. This is basically bang on average for slot game RTP rates, so it’s the standard players have come to expect in terms of volatility and payout rates.

Hot Blizzard sits on 5 reels and 5 win lines, which is typical for a traditionally inspired fruity slot game. The maximum win is a nice 10,000, for bets waged between 0.1 and 10. Hot Blizzard also offers an autoplay feature, as many modern slots do now, which is good for players that wish to simply place their bets and let the reels roll. Hot Blizzard slot game also offers multiplier and free spin options, as well as Wild symbols and Scatter symbols. Be sure to watch out for the lucky 7 symbol, as landing this on your reels is sure to be fortuitous in landing some of the game’s best features.

Sadly, one area that Hot Blizzard falls short in is its lack of bonuses in any sense, whether it be mini games or otherwise. A positive to this is that it’s sure to appeal to the more old-fashioned gamers that prefer simple, traditional slot games without pizazz or complexity. However, if you’re one of the gamers that do enjoy a slice of bonus features, maybe sit Hot Blizzard out.

Overall, Hot Blizzard is obviously a slot game created to appeal to the gamers passionate about the simplicities of slot gaming, rather than tailoring to a unique theme or venturing out into innovative bonus features and other content. It’s bound to be disappointing for some of the more modern casino gaming fans, but for others, it’ll be a welcome breath of refreshing, back-to-basics air.

Did you like Hot BLizzard? Play more from our very best selection of slot games and get the thrill of the glitz like you were in a land based casino but in the comfort of your house. Play online, win at Las Vegas Casino.