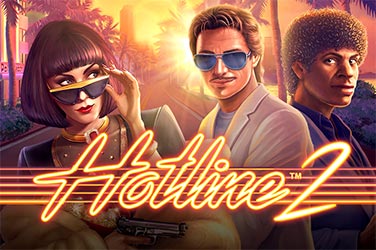 NetEnt’s Hotline 2 slot game will take you back to the ‘80s with its retro theme and vibe, and there are also some interesting features that can really pump up your prizes as well.

This slot game is a sequel to Hotline, and so the Miami Vice influence is back, with the game being set with a backdrop of palm trees and calm seas, along with a scenic view of the city as well. The sunset adds a colourful edge to the scene, with a retro soundtrack also adding to the ambience.

In Hotline 2 slot game, the pay symbols start at the low end again with a range of gems in green, blue, purple, orange, red and pink, awarding 0.33x to 0.83x your bet for a single five of a kind. They are followed by a new guy with a head mic, the 2 detectives Quinn and Riviera as well as the female villain Kitty Weiss. Hit five across the slot reels to win 1x to 2.66x your stake. Wild is a red sports car, appearing on reels two to four only and substituting for all regular pay symbols while a neon-lit flamingo marked with the word itself acts as the scatter.

Releasing a sequel to an existing slot always raises expectations as players look forward to finding out what new mechanics or features the developer has included to entice them to give it a spin. NetEnt did some quite dramatic changes with a new reel set, a random modifier and a different free spin feature. They kept though the core to the gameplay, the Hotlines, only that now they have been inverted into vertical lines. No need anymore to activate one to three hotlines like on the original, instead, the three centre reels are vertical Hotlines at all times. Any wild landing within the zone will expand to cover the entire reel when it will create or improve a winning combo.

Fast cars remain wild symbols in the Hotline 2 slot. Both regular wilds and expanding wilds can substitute for all paying symbols except scatters when they land on reels 2, 3 and 4 in the base and free spins game. Landing a wild symbol on a hotline will trigger the cinematic wild expansion action.

Landing three of the this slot Scatters within the Hotline zone will trigger the free spins round, where you can potentially expand reels 2, 3 and 4 up to six symbols high, to increase the active paylines to 1,944, and also get two extra free spins for every reel, meaning that you can get a maximum of six extra spins in this round. You get 7 free spins to start with.. Any wild landing on a free spin will increase the respective reel by one symbol, up to the aforementioned maximum of six. Wilds will keep expanding as in the base game, providing more potential to score big wins.

This is a medium volatility slot game with an RTP of 96.05%

NetEnt have delivered an excellent sequel to a popular slot game here, and it will be no surprise if this game surpasses its predecessor in quality and excitement. Check Las Vegas Casino best games