House of Doom 2 The Crypt Slot 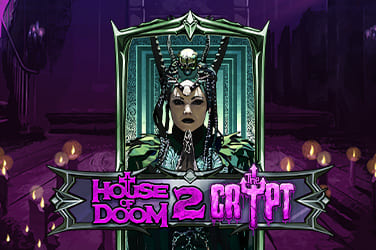 This is an interesting slot game from Play’n GO; it is a sequel to their 2018 game House of Doom, and it has added quite a few new features and win options to the original to make it even more fun and rewarding.

This is a horror-themed game, with a very dark and Gothic influence being seen in the visuals and gameplay. It actually takes inspiration from ‘House of Doom’, a song by the Swedish doom metal band Candlemass, and therefore even the soundtrack is suitably dark and filled with heavy metal influences. The slot game is set in a tomb or mausoleum, with the reels being flanked by some ornately carved statues and pillars, while the reels themselves are dark as well.

The standard card royals show up in the form of blood red icons, while the themed symbols include a pair of daggers, a flower and a melting candle. The most valuable symbol is the skull, which can reward you with up to 10x of your stake if you land 5 across a payline.

This game has 5 reels, 3 rows and 20 paylines, where winning combinations are formed by landing three or more matching symbols on a payline, starting from left to right. Players can bet from 0.20 €/£/$ up to 100 €/£/$ per spin.

In addition to the symbols mentioned above, there are also 3 different wild symbols which can land in the base game. There’s a fourth that can come alive if you manage to unlock the Crypt Spins feature.

On any base game spin, the Spirit Gate can appear on a random position on the slot reels. If a wild symbol lands in the Spirit Gate, it expands to fill the whole of that reel. The Spirit Gate feature is activated and awards a re-spin along with a special modifier, as seen below –

Queen of the Damned feature: land the Queen of the Damned wild in a spirit gate and extra Spirit Gates are added for the re-spin. This boosts your chances of landing further expanding wilds
Fire Mistress feature: when the Fire Mistress wild lands in the Spirit Gate, it awards a random multiplier which is applied to any win you achieve on the re-spin. That multiplier can be worth 2x, 3x, 5x or 10x
Metal Priestess feature: the Metal Priestess wild transforms symbols during the re-spin, turning all the Ritual Relic symbols into the more valuable Skull symbol

The free spins round is triggered by landing the scatter symbol on the first, third and fifth reels on the same spin. The modifier received depends on the zone in which you are currently playing.

Landing a Wild in the Spirit Gate during the free spins will trigger the relevant modifier. There will be at least one Spirit Gate on every spin in this round.

The Crypt Spins feature, which is even more lucrative, is triggered by landing three flaming crypt scatter symbols during the free spins round. This will give you eight Crypt Spins to play. If you land a Spirit of Unity wild in the Spirit Gate slot feature, it rewards a re-spin where the 3 Spirit Gate features are all applied to your win (the Queen of the Damned, Fire Mistress and Metal Priestess features).

This is quite an excellent sequel to the original House of Doom slot by Play’n GO. The overall theme, gameplay and graphics all combine to make it a must-try for fans of the genre as well as those who loved the original game. House of Doom 2 is just one of the many games Las Vegas Casino as to offer. Check our most popular games