How to Play Book Of Dead Online Slot 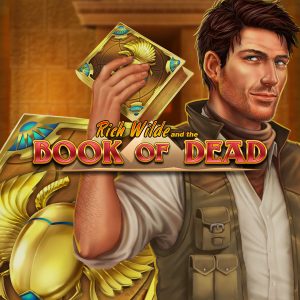 Book of Dead Online Slot: What is it?ew

From the discovery of Tutankhamun’s tomb to the huge success of Indiana Jones, the sheer romance and mystery of Ancient Egypt has cast its spell over us.

As such, it was a clever backdrop for Play’n Go to create a popular slot game like Book of Dead set in Ancient Egypt.

Perhaps it is the sheer strangeness of the civilization combined with its undoubted sophistication that Book of Dead appeals to: pyramids, temples, the curious process of mummification and of course long-lost tombs filled with untold riches surrounding the great Pharaohs buried within. The belief was that the dead would need everything in the afterlife – from their organs (hence the perfectly preserved bodies) to this quite extraordinary wealth.

Not only were the pyramids quite extraordinary architectural and engineering achievements – built without modern machinery – the art work found within tombs and the seemingly bizarre rituals of Ancient Egypt have spawned countless books, films and stories, often involving intrepid explorers. The Book of Dead has been a source of particular intrigue.

All this is deeply rich material for anyone designing a popular slot game for an online casino.

And for a largely UK online casino such as Las Vegas Casino, the appeal of this popular slots game is evident. After all, it was the British archaeologist Howard Carter who discovered Tutankhamun’s tomb in the 1920s. He was a compelling, complicated, brilliant man, widely rumoured to have had an affair while out among the pyramids with Lady Evelyn Herbert, wife of the Duke of Carnarvon. And we know (ask Immortal Romance fans) how many players of popular slots like a bit of romance.

The epitaph on Carter’s grave, by the way, is particularly beautiful: “May your spirit live, may you spend millions of years, you who love Thebes, sitting with your face to the north wind, your eyes beholding happiness,” taken from the Wishing Cup of Tutankhamun. What, one wonders, would Carter make of a popular online slot game like Book of Dead?

The Book of Dead in its real form was a text for a funeral and was written on papyrus and used from the beginning of the so-called “New Kingdom” – around 1550 BCE.

It consisted of a number of magic spells. These were meant to help the dead person through the Duat – the Ancient Egyptian term for the underworld and into the afterlife. Like many important religious texts, it was written over hundreds of years by many different priests. It also depicts numerous ancient gods including Anubis and Thoth.

It would be put in the coffin or burial chamber and came in many different forms, so really there was no one Book of Dead, but rather many Books of Dead. Particular spells were considered more relevant to different people, so those spells would be contained in their Book of Dead. There are said to be 192 spells in Book of Dead but these cannot be found in a single manuscript. Book of Dead seems, to us, an odd mix of the religious and the magical, even putting spells on the Gods to make them look after the newly dead person into the afterlife.

Ancient Egyptians believed that knowing the name of something gave power over it; so Book of Dead enables its owner with the mystical names of many of the entities he would encounter in the afterlife, giving him power over them. A Book of Dead has been found that was 40 meters longs, no doubt the property of royalty, before scribes and priests were also given their own Book of Dead. Text was typically in black ink in a Book of Dead, with the spells in red.

There are still many a Book of Dead waiting translation around the world – who knows what spells they might contain, and what this could mean for a new popular slot game to intrigue and even spook players on UK online casinos in the modern age.

How Book of Dead Became Such a Popular Slot

Whatever the rights and wrongs of that argument, Book of Ra now looks (to us at least) pretty dated. Book of Dead, in contrast, looks as good as any popular slot to be found in a UK online casino.

Like earlier popular slot games in the series, Book of Dead follows the adventures of Rich Wilde.

Just FYI, Book of Dead Slot Game is not the only Rich Wilde adventure found amid popular slots. He is the star in South America in Aztec Idols slot, India (Pearls of India slot), Tome of Madness (this followed Book of Dead) , Shield of Athena (this stars Rich Wilde’s daughter, Cat), Doom of Dead and Amulet of Dead popular slot game.
For those of you experienced playing online casino games, this popular slot has a five reel, three row and ten fixed payline. There is also a special bonus feature available in Book of Dead that can be triggered at random.

You get caught up in the adventure of this popular online slot due to the first rate graphics and music, with symbols representing both Rich Wilde and Ancient Egypt with Anubis, Tutankamum, and Ra all emerging.

How to play Book of Dead?

When you play Book of Dead, please select the number of paylines you want to bet on.

Then, you can set your own bet size by adjusting the number of coins and coin value.

The minimum betting amount of the game is 0.10 credits, the Book of Dead max is 100 credits. So Book of Dead is good for a VIP or a high roller on a UK online casino or simply someone trying an online casino for the first time and intrigued to play one of the all-time popular online slots.

So we assume you have specified your bet size. Then all you need to do on Book of Dead is click on the spin button to set the reels in motion.

Here is the Las Vegas Casino three step simple guide to playing Book of Dead slot on our online casino:

Select how many paylines you want to wager on

Once you load the game on your desktop, tablet or phone, go to the main menu and select how many lines you want to stake money on. Select a minimum of one line or the entire ten lines, the choice is yours entirely on our online casino.
Set your bet size

Having selected the number of lines, you should set the amount you want to wager. You can do this by adjusting the number of coins and coin value.
Then click on the “Spin” button on Book of Dead for the reels to start spinning

Once you have set the size of your bet, you can click “Spin” – as the name suggests, this will spin the reels of the slot game. Please be aware that winnings depend on the paylines you activated and naturally the amount you decided to wager.

Symbols on Book of Dead

The Golden Book icon is Book of Dead’s scatter symbol in this popular slot, linked to the free spins feature. This symbol can pop up anywhere on the reels of Book of Dead. Should you succeed in landing five of them on a single line, you will get a big win: 200x payout.
Wild symbols
The Golden Book icon, so you know, is also the wild symbol of Book of Dead, and it can substitute other symbols on the slot game to help you get to that winning combination. Here’s the thing: will the icon act as the scatter or wild? Well this depends on how many you land on the reels while playing Book of Dead.
Expanding Symbols
As well as wild and scatter, Book of Dead has also has another nice feature: a special expanding symbol. This expands and covers all the reels. This is a big moment, and naturally you can win more prizes. These symbols on Book of Dead, BTW, can appear anywhere on an active payline. This goes on to form a winning combination of its own.
Other symbols
As well as the special symbols, there are indeed symbols on Book of Dead that populate the reels of the slot. So low-paying symbols are characterised by the royal card suite – 10, J, Q, K and A. Regarding high-paying symbols, these include Book of Dead, Pharaoh’s Mask, Anubis and Osiris. Naturally enough, being our main man, Rich Wilde is the highest paying-out symbol, and landing five on a line pays the maximum prize of 5,000x. Wow.
As you can see by now, you can have fun playing on a UK online casino such as Las Vegas Casino if you choose popular slot games such as Book of Dead.

How to win on Book of Dead

So we all know about ancient treasure in Egypt but how do you win more modern treasure by playing Book of Dead at a UK online casino such as www.lasvegascasino.com.

Many customers want strategy, tips and tactics to win at Book of Dead and other popular slots.

Every player is different, but we stick to our average wager and don’t increase it once the cash starts to roll in. This though is your choice

Really look out for the expanding wild during free spins. If you get two or more on a payline it will expand to cover the whole reel, which means you will win big

Remember Book of Dead is a high volatility game

Only play Book of Dead at a reputable, licensed UK online casino such as las Vegas Casino.

Book of Dead is all about treasure. Each symbol represents a different payout. Different combinations offer prizes for each spin ranging from little to large. Clearly Mr Wilde is the star of Book of Dead, so he has the biggest pay out.
Book of Dead can be played at Las Vegas Casino on a desktop, tablet or mobile device such as iOS and Android.