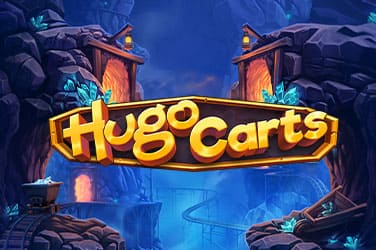 Hugo Carts is a 5×4 slot game developed by Play’n GO, an award winning supplier of high quality gaming content that was founded in Sweden in 1997. The LasVegasCasino has a Demo Play option for Hugo Carts through which you can play this online slot game for free.

Hugo Carts is a mining themed online slot game with the golden mine as a backdrop. The backdrop is well lit for an underground mine and the 5×4 layout is made of wood. The symbols are neatly designed and go well with the wooden background. The music is intriguing and goes well with the theme of the slot game.

Landing 3 or more matching symbols on the adjacent reels from the leftmost reel will award a win.

The Bag of Golden Nuggets is the Wild Symbol in this online slot that substitutes for all regular symbols and pays 3x, 5x or 10x the stake when you land 3, 4 or 5 Wild Symbols.

The Dynamite Symbol is the Scatter symbol and landing 3, 4 or 5 more Dynamite Symbols will activate 7, 9 and 11 Free Spins respectively. Don Croco appears at random times in the base slot game and drops 2 dynamite scatters onto the grid to increase the chance of triggering the Free Spins.

This slot game theoretical RTP is 96.23% which is really good for a slot game.

Hugo Carts is the fourth Hugo slot game from this developer and they have added extra features to reward the players more compared to the previous versions. The base slot game is interesting enough to play and it takes to a whole another level when the free spins are triggered. The Re-Spin features, Free Spins and Retriggering of the Free Spins and a 25,000x jackpot are enticing enough to play the online slot game. Play this amazing slot and other popular online casino games at Las Vegas Casino.