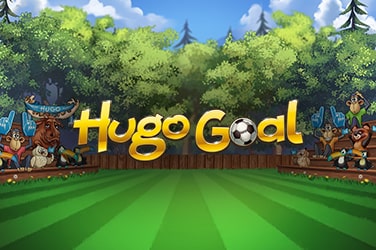 Hugo Goal, from Play’n GO, is a cute and fun take on the game of football, with a number of adorable cartoon characters taking to the pitch to try and score some goals and win you some juicy rewards.

Hugo is a pretty popular character from previous Play’n GO slot games, and here he teams up with Don Croco and the Goat, with the troll-hating Afskylia showing up as well, for some World Cup-themed fun and games. Hugo is based on an immensely popular Scandinavian cartoon figure, and thus the visuals are all suitably cartoony and fun. The reels are transparent so you can see a number of other cartoon animals cheering Hugo on. Symbols such as muddy boots, footballs and referee’s whistles are all on the reels as the themed icons for the game, along with stopwatches and corner flags. The Goat, Don Croco and Afskylia are the special symbols, and they can land as fully stacked icons, increasing your potential payout, while Hugo is the slot game’s Wild and therefore can substitute for other symbols to help create winning combinations.

The game has three reels, three rows and five fixed paylines. The slot game interface makes it quite easy to select your bets before you start spinning. Since setting your line bet across the 5 fixed paylines is the most important task, Play n Go have made it easy to select a wager between 0.05€/£/$ and 100.00€/£/$ just by clicking the plus and minus arrows. If you open up the paytable as you choose your stake, your multiplier return will be cleverly calculated for you. Autoplay choices are similarly easy to set, and there’s plenty of customisation. Choose your autospins between 10 and 100 and then choose your modifiers like a stop on any win or if a bonus game is won, and set loss and win limits to keep an eye on your bankroll.

You need to land three matching symbols across a payline to have a winning combination in this game. Hugo, which is the game’s Wild, is also the most valuable symbol in his slot, paying out up to 16x of your stake, while Afskylia, Don Croco and the Goat will all give you 5x, 4x and 3x multipliers for landing three of them in combination.

The Action Replay Feature is randomly triggered on non-winning spins when there are two full stacks of character symbols on two of the reels – the third wheel will then respin until you get a winning combination.

If you have two full stacks of the lower-value symbols instead on a non-winning spin, the Free Kick feature is activated – the third reel respins here as well to try and form a winning combination, but this happens just once.

If you manage to stack the entire grid with the same symbol, the Penalty Shootout feature is activated. Here, in this slot game feature Hugo becomes the goalkeeper, and has to save as many penalties as possible. There are five penalties taken, and each save increases your multiplier from 1x up to a maximum of 10x for saving all five penalties. You just have to guess which side the penalty will be taken, and if correct, Hugo will make the save.

This is a high volatility slot game with an RTP of 96.49%

Play’n GO have taken a popular cartoon character and used him in a very smart way here, while also counting on the popularity of the game of football. Hugo Goal is a fun and cute slot game that will definitely be a big hit with slot game fans all over the world. Have some fun at Las Vegas Casino