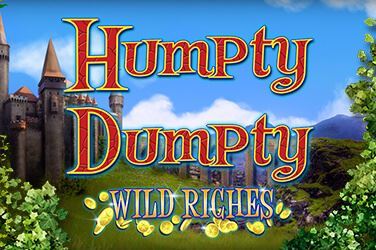 And all the king’s horses and men… you know the rest. The old children’s rhyme can be depicted in 2BY2 gaming’s Humpty Dumpty Wild Horses. As the main character of this 5 reel 30 payline online slot machine, Humpty Dumpty is willing to generously give you parts of his body for you to win hefty rewards.

The Humpty Dumpty Wild Riches slot game exuberates a sense of banterful optimism through its design and soundtrack. This online slot has exciting features centered around its Wilds, Scatters and Free Spins with a variety of bonuses.

The overall design of this slot game is underrated and quite immersive. This can be noticed through its soundtrack as well as the friendly banter that Humpty Dumpty engages the slot player with. In addition, Humpty Dumpty Wild Riches video slot has a mountainous backdrop that complements the wall on which he sits.

The castle setting is further captured by the game’s respective symbols. Some of these include a soldier, castle and horses. 2BY2 succeeds in capturing the universe of the famous rhyme throughout the player’s gaming experience.

The betting range of Humpty Dumpty Wild Riches is between 0.30 to 30 credits. This is a standard range and is better suited to players on a budget and seasoned players alike. The main objective of this slot game is to create combinations of similar symbols in order to yield payouts.

Note that some symbols yield better payouts than others. The royal symbols consisting of 10, J, Q, K, A are the lower symbols. Conversely, the high value symbols the mounted knight, a castle, bag of gold coins and toadstools. These can be used in conjunction with the game’s features and bonuses to yield a maximum pay out of up to 2000x the initial wager.

The wild in Humpty Dumpty Wild Riches is represented by Humpty Dumpty himself. This gives him the ability to replace all symbols except bonus symbols in order to increase your winnings. Note that this wild only appears on reel 3.

In this online slot game If all positions are filled by the wild on reel 3, we see Humpty Dumpty getting pulled to pieces. This makes reels 3 and 4 filled with wilds and adds an extra reel to the grid.

The return to layer (RTP) of Humpty Dumpty Wild Riches is 96.05%. This means that theoretically, a player wins an average of 96.05 for every 100 bet made, Note that this average is a cumulative of over 4000 attempts.

Note that the variance and volatility of the game is between low and medium. This means that the player can expect comparatively stable payouts.

Try amazing online slots like this at Las Vegas Casino