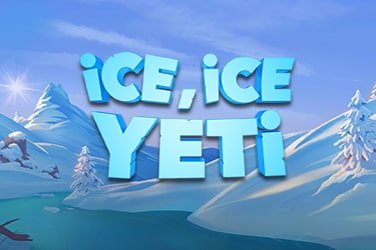 Nolimit City takes you on a journey in the frosty depths of the tundra. Ice Ice Yeti’s excellent design works harmoniously in conjunction with its wide variety of features and bonuses.

The player is in the search of the Yeti and gets help from some cute little cubs, called rascals, along the way. This slot game has the potential of reaping some hefty rewards that are sure to keep you more than warm for the upcoming winter.

Ice Ice Yeti has 5 reels, 3 rows and 16,807 ways to win. Due to its high volatility, the player can win big because of a large number of win variations.

Nolimit City has demonstrated a strong game execution in Ice Ice Yeti. This is noteworthy because the graphics are neither top-end nor minimalist. Instead, the video slot game succeeds in creating an immersive gameplay experience through a sharp visual design.

This online slot is set in the backdrop of endless snow on a mountain. In addition, Nolimit City advocates a sharp shade of light blue that makes the game look sophisticated and magical. Moreover, the design of the slot game’s symbols is well-detailed. The rascals are particularly adorable to look at and create a light-hearted and pleasant atmosphere.

The betting range of Ice Ice Yeti is between 0.10 and 100 credits. This is fairly broad and is thus, accommodative of budget players and high-rollers alike. The game has a simple and easy to navigate user interface and functions without fault across all devices.

The maximum payout of Ice Ice Yeti is a whopping 8820x the original bet. This can be won by combining standard gameplay with the online slot game’s features and bonuses

The showstopper of this slot game is the wild, represented by the Yeti itself. This has the ability to replace any symbol on the reels in order to make a better winning combination. While the video slot game does not have any free spins, the wilds can trigger respins.

The Wild Yeti has the ability to break up to 3 ice blocks on the grid. In addition, the wild is a sticky wild during a repsin and stays on the grid when it happens. Furthermore, during this feature, the player has the option of expanding the reels that award up to 16,807 ways to win.

The Yeti Shake feature is one that gets randomly activated. It has the potential of breaking 2-10 ice cubes that can be quite rewarding to the player.

The return to player (RTP) of Ice Ice Yeti is 96.16%. This means that theoretically, a player wins an average of 96.16 for every 100 bet made, Note that this average is a cumulative of over 4000 attempts.

With an excellent design, a healthy RTP and the potential to win hefty rewards, Ice Ice Yeti has a strong replay value.

Check this and other amazing slot games here at Las Vegas Casino.