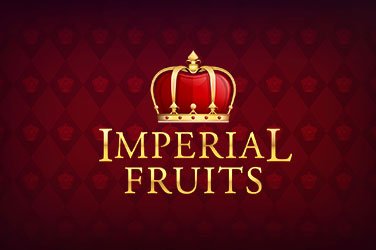 A top gameplay experience with the potential to win up to 100x the bet is available in Playson’s Imperial Fruits 100 Lines slot game available at Las Vegas Casino!

This Imperial Fruits 100 Lines online slot game from Playson provides bettors with a rather simple theme, as they have adopted a backdrop that consists of a red colouring, which also appears to have a design on it; looking slightly like a wallpaper design in a way.

The visuals are sharp, though, as the gold trim on the playing grid as well as the symbols has been expertly done and is a nice touch, whilst the icons look rather impressive, as well.

The paytable features a range of different icons to collect, with the classic fruit icons consisting of the orange, the cherries, the plum, and the lemon being followed by a pear, grapes, watermelons and then the red lucky seven.

As perhaps can be inferred from the name of the game, this Imperial Fruits 100 Lines slot provides bettors with the opportunity to win from 100 different paylines.

The grid consists of 5 reels and 4 rows in order to facilitate the number of paylines available, with each of them fixed in play with each spin that is taken.

Las Vegas Casino bettors may have noticed that there are a handful of symbols that were not mentioned earlier and this is because they are key in providing them with the Imperial Fruits 100 Lines bonus features that are available to trigger.

The first of these is the 2 scatter symbols that can be found, with a gold star and a diamond star both possible to collect. These icons are both paying symbols, therefore anyone who lands a winning combination of 3 or more of these icons anywhere on the grid will receive a payout.

Players will, though, need to note that the diamond star scatter can only appear on reels 1, 3 and 5.

In addition, another Imperial Fruits 100 Lines bonus feature comes in the form of the Crown icon that can be found on the paytable of this game, with this icon being the game’s wild. However, it is not a basic wild, as it has the ability to expand and can appear on reels 2, 3 and 4. It does not provide a payout by itself, but it can help to complete winning sequences and produce some rather big wins when utilised!

In addition to the range of betting values on offer, this Imperial Fruits 100 Lines slot game provides a return to player (RTP) rate of 96.42% and comes with a medium variance level.

There is no doubt that this Imperial Fruits 100 Lines slot game is an incredibly enjoyable game to play and one that is simple to experience!

Play this game and see if it can provide you with the best experiences possible now!