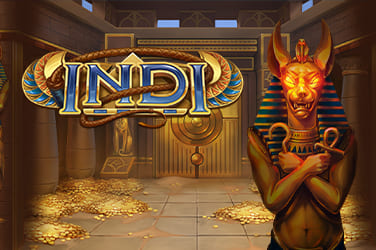 Free Spins are just one of the key features available in this Indi slot game from Gluck Gaming, whilst a simplistic gameplay experience is provided.

Gluck Gaming have gone down the Ancient Egyptian theme with their Indi slot game title, as the visuals that they have used make it evident that is what they have set out to achieve.

The game is adorned in a gold colouring that provides a sense of wealth, which is befitting of the theme adopted, whilst the game is also set on the backdrop of what would appear to be inside of a pyramid or a temple found in the era.

Furthermore, the paytable provides a number of different symbols that can be easily associated with the Egyptian theme. Although this Indi online video slot game still uses some of the basic royal playing card icons, there is Indi, the Sphinx, the Eye of Ra and Ra in his bird form all available to try and form wins with.

This Indi video online slot game comes with a playing grid that consists of 6 reels and 3 rows, which means it is slightly bigger than many of the traditional formations that many other slot titles adopt.

There are a total of 10 fixed paylines available in this game, though, which means Gluck Gaming have made this title as easy as possible to play and follow, which is always a nice bonus!

Speaking of bonuses, there are a number of Indi bonus features that can be triggered within this game, with special icons playing a role.

The flaming Roches are the game’s wild icon and these can help to substitute for all regular icons on the paytable in order to fill in the gap and create a winning sequence where possible.

In addition, there are scatter icons available in this game, which will take players into the biggest Indi bonus feature that is possible; the free spins game.

Players who land three or more of the ornate book symbols will be able to trigger this game, with 8 free spins being initially rewarded to those who do. More free spins can be awarded throughout the feature, with players being required to land more book icons in order to do so.

Before the game starts, a random symbol will be selected that can expand to fill an entire reel, thus potentially increasing the opportunity to win, as well as increasing the amount that may be won if it lands.

If more free spins are triggered, then another icon will be selected randomly and will be added to the first one that was chosen, thus providing players with two potentially rewarding icons!

A return to player (RTP) rate of 95.20% has been provided by Gluck Gaming for this title.

The free spins available is a huge draw, whilst the random symbols that are added to the bonus game also keep players on their toes, whilst also jumping with excitement as they provide the possibility of earning big!