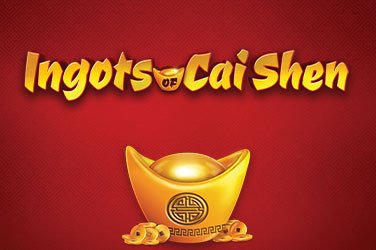 Ingots of Cai Shen is yet another video slot game, this time by Microgaming, that has an Asian theme. These slot games are extremely popular, and there are a bunch of special features and bonuses that will keep fans and players interested and engaged.

Given the theme, it is no surprise to see that the colours red and gold dominate this video slot game. This is common for Asian-themed online slots, and the various symbols are also similarly created. The various card royals which form the low-value symbols all look like Chinese alphabet characters, while the high-value symbols include golden koi fish, Chinese lanterns, golden ingots, coins and bells. There is also the God of Wealth who appears at the side of the reels with a table showing the different values for the four different jackpots in Ingots of Cai online slot. The gold ingot is the Ingots of Cai’s Scatter symbol, while there is no Wild.

Ingots of Cai is a 5 reel video slot with 3 rows and 243 paylines. The Scatters only land on the three middle reels, from where they can trigger the free spins round. The koi fish is the highest paying symbol in this slot, and can pay out up to 2,340x of your stake if you manage to cover the reels with it. The rest of the symbols can all also pay out handsomely in a similar manner, but in general, you need to land at least three of them on a payline to receive any reward.

There are a number of lucrative bonus features in Ingots of Cai online slot, starting with the Ingots Collect feature. This is triggered by landing a full stack of the Chinese ingot symbols on the first reel. Now, any ingots on reels 2 to 5 will award cash prizes, or a Mini, Minor or Major Jackpot symbol. All of the prizes will get collected on the triggering spin, while the cash prize ingots can be stacked up to 3 symbols each.

Cai Shen, the God of Wealth, can also randomly step onto the reels and appear on the first reel. This will turn that reel into a fully stacked ingot reel, which triggers the Ingot Cash Collector Bonus. All cash ingots between reels 2 to 5 will then be collected, while you can also win the three smaller jackpots –Mini Jackpot (25x), Minor Jackpot (50x) and Major Jackpot (250x).

The Mega Jackpot (1,000x) is claimed if you manage to fill the reels with the ingot symbol.

Landing three of the scatter symbols on the middle three reels triggers the bonus round, where you are awarded 8 free spins. Here, it is easy to trigger the Cash Collector Bonus, as all you need to do is land 1 ingot symbol on the first reel, as it will expand to cover the entire reel.

The name of the game, Ingots of Cai makes it quite clear as to what the important elements of this slot are – ingots and Cai Shen. You will get the most enjoyment and rewards from this game when you trigger the bonus features, and it has been made relatively easy to do so, creating a pretty lucrative Asian-themed online slot.
Try this and other great online casino games here at Las Vegas Casino.