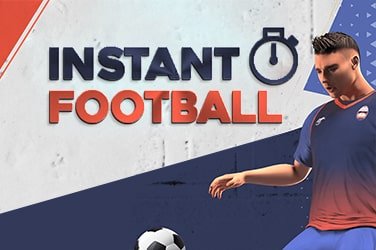 There is nothing better for Las Vegas Casino players than watching a football match and betting on the action. LEAP Gaming provides them with the chance to do so with their Instant Football game.

By being able to watch a match of football be played out between some of the best teams in Europe, players are able to bet on the action in this virtual game that features some brilliant graphics and features.

Once this slot has been loaded, players will be met with some excellent visuals and graphics. The Instant Football online slot provides a host of quality animations and graphics, making it appear like a football game that can be played on a video console or on a computer, thus further making it appeal to many around the world. Although the Instant Football video slot does not have any symbols available like many traditional online casino games would, there are 16 of the best teams from Europe available to choose from, with each of them having been handed their club colours.

As mentioned, this casino game by LEAP Gaming is nothing like a video slot, however it is just as easy to play. Instant Football players have a number of options available to them that help make the overall gameplay experience of a high quality. The casino slot players can choose which two football teams will go up against each other in the showdown match, with the possibility to change to any of the 16 involved.

There are three main bets that can be placed in this Instant Football game, with the end result being the focus. The video slot players can either bet on which team will win, or if the contest will end in a draw; just as many would when dabbling in sports betting. Players can find more bets, though, when they hit the ‘More Bets’ option. Once the bets have been determined, the action will get underway, although players can fast-forward to the final whistle by hitting ‘Quickplay’ in the settings.

There are a number of game bonuses that players have been provided by LEAP Gaming in this Instant Football online slot, with many of them being reliant on the type of bets to have been placed. These work as the following:

Double Chance – Players who use this when they bet on one team to win and see the match end in a draw will still receive a payout.
Half Time Result – This can be chosen when you can’t decide who will win the game, but you feel like you know who will be leading at half-time.
Over/Under – This is where Instant Football slot players can bet on the total number of goals scored, by picking either ‘Over’ or ‘Under’ the number that has been provided.
Correct Score – This bet will see the biggest rewards paid out when players correctly predict what the final score will be.

The casino slot can be played with bets as small as €/£/$0.10 although those that are comfortable in their bets and the team they have chosen can look to place bets of up to €/£/$500. The Instant Football online video game’s return to player (RTP) rate has been set at 91%, thus being a little lower than any of the traditional slot games that are created.

Looking for a realistic online sports betting game experience can be a challenge, however Instant Football by LEAP Gaming can be the answer to all your demands. This online slot game features some brilliant graphics and is rather easy to play, thus making it even more enjoyable to watch one of the best football teams in Europe aiming to try and make your bets come true!
Check this and great online casino games at Las Vegas Casino